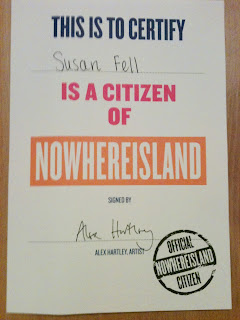 Heard about this project recently and it appealed to me. I love the way it uses art and nature to bring people together, and I also love the very Britsh quirkiness of the project. I am proud to be a citizen of Nowhereisland! Below is info about Nowhereisland taken from its website.
Nowhereisland is an island from the Arctic on a journey to South West England, arriving during the Olympics held in London.. As it made this epic journey, it travelled through international waters, whereupon it became the world's newest nation with citizenship open to all called Nowhereisland.
Along it's journey it is accompanied by a mobile Embassy, packed full of intriguing objects and fascinating information and hosted by the Nowhereisland Ambassadors.
Nowhereisland is an artwork by Alex Hartley which has caught the imagination of thousands of people across the world.Over 15,000 people from all over the world have already signed up to be citizens, contributing to the online constitution and responding to the year-long Resident Thinkers programme. Also school and organisations along the south coast of England are getting involved.
Along its coastal journey, Nowhereisland will visit eight ports and harbours where it will be hosted by choirs, bands, citizen marches, a flotilla of surfers, gig rowers, sea shanty singers and thousands of people on cliff tops, beaches, harbours and promenades. Find out more about Nowhereisland's journey.
Nowhereisland is a Situations project, one of 12 arts projects across the UK, funded by the Arts Council of England, and is part of the London 2012 Cultural Olympiad in summer 2012.
Read all about Nowhereisland here
Posted by Sue Fell at 20:09