Iceland 3 - No Whales, a Reykjavik Tour and Pizza

24th March 2012
Luckily we could lie in a little today as our whale watching trip did not leave until 12.30pm.  Last night we got back to the hotel at 2am and I was so excited I didn't get to sleep until after 3am!  I was just lying in bed coming round when I got a text.  It was from Elding, the firm that was running our trip today, saying that due to predicted bad weather the trip was cancelled.  I looked out of the window, the weather was the best I'd seen it on this trip to Iceland, but that country is a bit like the UK, the weather can change in minutes.

Glen and I met up and discussed what to do this afternoon instead.  We decided to do another trip, and went for the Reykjavik tour.  So at 1pm we were heading into the city on the bus, our guide was Julia, was half English.  Our first stop was Hallgrímskirkja, the gorgeous main church of the city, you see it's graceful steeple from many places.  We'd visited it before nut it was good to go again, it is such a beautiful building, said to be inspired by the volcanic though it is light coloured as are many of the buildings in Iceland.  By now there was a vicious, icy wind blowing - now I realised why the boat tour was cancelled!

We visited the harbour and saw our Elding boat in dock.  On the opposite quay were two whaling boats, it turned my stomach to see them, and sad to think that some of the whales the tour company sees at sea may end up on those killing boats.  It was interesting to hear that there is also a lot of opposition to whaling in Iceland itself which was good to hear.

We went to another seashore and the Presidents home across the bay was pointed out to us.  Last time we visited it, but on a day like this we would have been blown off our feet as it is a very exposed area.  We then went up a wooded hill called Öskjuhlíð to Perlan - The Pearl.  Our guide for some reason did not like the pine trees, but I liked them, there are few trees in Iceland and a patch of green was good to see.  This where the geo-thermal water is stored in large tanks before being pumped around Reykjavik.  Above the tanks was a big dome that housed a museum, cafe, restaurant and shop.  It also has a 360 degree walkway around the dome that gives stunning views over the city and countryside.  Again we had visited Perlan before but it is always a lovely place to visit and we had lunch there. Not many people went outside and those that did came in looking very windswept to say the least!  We didn't go out, we got fantastic photos last time. 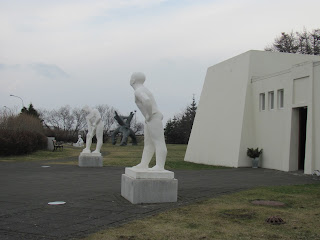 We continued our tour, which was turning out to be very different from the last city tour we took here, I suppose each guide has their own routes and places on the agenda.  Julia's trip was nice because it was very personal and she told us how Reykjavik has changed since she was a child here in the 50's and 60's. She told us the story of the washerwomen from the city who would walk miles to a hot spring in the valley to do their washing, at least they had hot water! It struck me once more what a spread out place Reykjavik is, the centre is relatively small and there are lots of large open areas and sprawling suburbs. 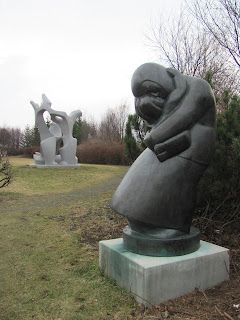 Our last stop was the Ásmundur Sveinsson Sculpture Museum in the Laugardallur Valley, a residential area of the city. Sveinsson (1893-1982) was a native of Reykjavik and the building the museum is housed in was both his home and studio.  We didn't have time to go into the museum but we walked around the garden around it which had numerous sculptures on view.  Some were very abstract others more realistic, I found I really liked his work, there was something very moving about them.  He had a sculpture there of the washerwomen Julia had told us about earlier.  Some sculptures were large others quite small and various materials were used. Shame we didn't have time to go inside.


We were dropped off in the city centre as we wanted to do a bit of shopping and have a meal.  We pottered about some souvenir shops, we both bought a Frostroses candle holder which a very pretty and I've never seen anything like them anywhere else.


We  wandered along looking for a restaurant we could afford and picked an Italian (can't remember its name) that was reasonably priced.  It wasn't a fancy place but the pizza we had was absolutely delicious and huge.  We even treated ourselves to a glass of wine each, (having wine in a restaurant in Reykjavik is a treat!) well it was the last night of our holiday and we actually had a little money left.


We left the restaurant and found the weather was getting really bad, the strong, icy wind was still there along with rain now.  We decided to get a taxi back to the hotel seeing the weather was so horrible.


Once back at The Cabin we had the last of the wine that we had brought with us before going to bed really early as we had to be up at the ungodly hour of 4am the next morning!  Night owl me was surprised that I managed to get to sleep by 10pm, must have been all the fresh sea air.


So our little holiday in Iceland was over.  I still feel Iceland is the most amazing place to visit, and the people are friendly and helpful (and speak excellent English).  The Blue Lagoon was like stepping into another world and what a wonderful day of chilling! It was disappointing not to get out on the whale watching trip, but that's the way with tours that require nature to play ball.  Seeing the Northern Lights made up for missing the whales though, the magic of that time on the snowy mountain pass watching the Aurora will stay with me forever.