My cousin Glen and I landed in Keflavik airport, Iceland on a damp, murky afternoon.  The airport is small so we were on our way to Reykjavik on the Flybus in record time.  It was misty and we couldn't see far beyond the road, occasionally eerie, black statues standing on plinths were visible amongst the chaotic lava fields that the road runs through. Iceland really is like no other place on earth.

Our hotel was The Cabin, a bit out of the centre of Reykjavik, overlooking the sea and beautiful Mount Esja. The rooms were very small, they lived up to the hotel's name, but were fine for our purpose.  By now the weather was really bad, windy and driving rain.  We had intended - at the recommendation of my friend Michelle - to go to see Icelandic singer Magni play in a pub called Den Danske Kro.  We were tired, it was a bit of a trip into Reykjavik city centre and the weather was vile so we decided not to go.  Instead we had a nice, reasonably priced meal at our hotel followed some of the wine we had brought with us (alcohol is very expensive in Iceland). 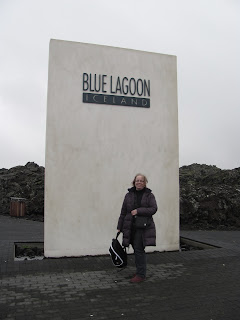 Up early today, had breakfast and then were collected for our trip to the Blue Lagoon.  That's something I like about Iceland bus companies pick you up and drop you off at your hotel. We took the road back towards Keflavik and branched off into the lava field not far from the airport.  As we approached we could see plumes of steam rising into the air.  We were dropped  off by a  pathway that weaved through the the six foot high lava.  It was very windy but dry.

After a short walk we went inside the building and got our dressing gowns and went to the modern changing rooms.  You enter the Lagoon via an indoor pool that is waist deep and then go out of a door into the Lagoon proper.  Initially the cold hit us, and what you have to do is crouch down until your head and neck are all that is not submerged under the bath-warm water of 37-39 degrees C. It's handy being small like me as I didn't have to  crouch very much, but as the water is very saline it wasn't an effort to crouch anyway.

The lava surrounding the Blue Lagoon was formed in 1226, it is known as Evil Lava as it is very rough and difficult to traverse. The geothermal water originates 6562 feet below the earth's surface where it is heated to 240 degrees centigrade.  As it comes towards the surface it cools and captures minerals from the earth which gives the water its distinct blue colour.

The water was deliciously warm, the heat of it varied a little in different parts of the Lagoon, but it was never cool.  There was a sandy/rocky floor which seemed natural but it must have been manmade as the rock all around is the Evil Lava which would not be good under bare feet!  I have a bit of a skin problem at the moment and found that as soon I was in the water it was soothed, and now days afterwards my skin feels as smooth as a baby's bottom!

It was very relaxing in the water, it wasn't very noisy or crowded and the Lagoon is also a lot bigger than I expected. All the rock on and below the waterline was white with a layer of silica from the water.  Steam rose from the water and beyond, mountains were visible in the distance.  It all felt very elemental and other-worldly as does so much of this amazing country. It is definitely a must-do when in Iceland.

One tip, if you wear glasses like me take them off they'll only steam up in the Lagoon, I had to store mine in my cleavage LOL!

We left the Lagoon showered and got dressed and went for a drink in the cafe.  We had facials booked Glen was in first at 1pm and I was at 2pm.  While Glen was receiving her treatment I had lunch of a very expensive burger in the Lava Restaurant.  Just before 2pm I went up to the treatment area and waited in the seats there, Glen came out looking very chilled and fresh-faced!  Then it was my turn to have a facial with Kristjana.  The "bed" was fabulous, it was shaped so that you lay in a gentle curve, very, very comfortable.  The room was quite dark, lit by candles and soothing music played in the background.  The facial was bliss, especially the massage part and she used Blue Lagoon creams rather than oils.  All too soon it was finished, as usual after a facial/massage I felt a bit spaced out and took a while to come round.

Glen and I went to look around the shop which was lovely but very expensive, I bought some shot glasses and a fridge magnet (I always buy the latter as a souvenir when I go away).  We then went for a walk along one of the paths around the lava fields and outer pools.  It was quite open there and there was a fierce wind that nipped your cheeks. The outer pools were as blue as the ones in the Lagoon but the water in them was cool.

After this we got our bus back to Reykjavik and our hotel.  It had been a fabulous day of chilling and I felt re-invigorated, I loved every minute of it!
Posted by Sue Fell at 21:10