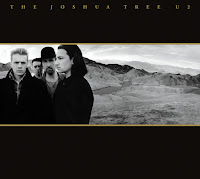 I know I'm a day late, but here's to The Joshua Tree, released 9th March 1987!  After all these years it's easy to forget just how revolutionary it was at the time.  Big sounds, full of songs that were to become classics with soaring voice and guitar which brought a new emotion to rock 'n' roll.

I was a fledgling U2 fan at the time and remember listening to the record (yes record!) for the first time and instantly loving every song.  That had not happened before or indeed since with any other album. It also cemented my love for U2's music, which in turn has led to making some wonderful friends, travelling all over the world and lots of other fun times. So as well as being a great album The Joshua Tree enriched my life in so many ways too.

Email ThisBlogThis!Share to TwitterShare to FacebookShare to Pinterest
Labels: The Joshua Tree, U2