September 3rd
Our last full day in Canada, and we were booked on an all day trip to Niagara Falls.  I had been there before during the time I lived in the country, but for Glenys it was a first and was also one of her long held travel ambitions.  As we travelled along the highway it brought back memories again for me, I remember being so excited at going off on my own for a while, I'd  visited Niagara and explored New York State.  I drove a Mini that the family I worked for had for me to use and in America everyone stared at it!  That  was in the days of massive cars there and being able just to drive over the border.
We had a great driver, Salim, who was very informative and funny.  He gave told us of a way to remember the five Great Lakes using their first letters = HOMES.  He heard a passenger sneeze at one point and said that means someone is missing you - I'd never heard of that saying before but thought it was rather sweet.
For most of the trip we skirted Lake Ontario which was huge yet it is the smallest of the Great Lakes, it makes you realise once more what a massive  country Canada is.  The area we passed through on the journey was mostly built up and not very scenic.
Our first stop was at a place where you could take a helicopter trip over the Falls.  We debated whether to do it, it would be a fabulous experience, neither of us had been in a helicopter, but the cost was $115 for a ten minute flight and we decided it wasn't worth it.  ﻿﻿﻿
﻿
﻿

We then went on to Niagara Falls and there's no doubt it is a magnificent sight.  The Niagara River is divided by Goat Island into the Horseshoe Falls in Canada and the American and small Bridal Veil Falls in the USA.   The Horseshoe Falls drop about 173 feet, and the height of the American Falls varies between 70–100 feet because of the presence of many giant boulders at its base. The larger Horseshoe Falls are about 2,600 feet wide, while the American Falls are 1,060 feet wide.  Both sets of Falls face Canada and therefore you get the best views by far from the Canadian side.
﻿﻿﻿﻿﻿﻿﻿﻿On arrival Salim immediately took us to the jetty to board The Maid of the Mist for our included boat trip to the Falls.  We collected the blue plastic macs and went onto the upper deck.

We first passed the American Falls, a curtain of powerful, frothing water.  Then it was on to the Horseshoe Falls, which are simply amazing, at one point it felt like we were totally surrounded by the water, we went in a lot further than I thought we would.  The "mist" at times blocked the falls from view.  We also got well soaked despite the macs - memories of our Icelandic boat trip came to mind, but at least the water wasn't quite as icy.  We always seem to get wet on boat trips!  The roar of the water was deafening and around us the water swirled and frothed like a witch's cauldron, whilst birds swooped all around.  It must take some skill to guide those small boats safely around  the Falls, it was an exhilarating experience.﻿﻿﻿﻿﻿﻿
﻿﻿﻿﻿﻿

Leaving The Maid of the Mist we passed the queue for the next sailing then we found somewhere close to have lunch.  All around the Falls there are tourist shops full of the usual stuff.  I said to Glenys that it was a shame that Niagara Falls couldn't be more like Gulfoss in Iceland, left wild and almost untouched by the trappings of tourism.  But I realise that it's inevitable that tourism would be eveywhere considering the location of Niagara.  Thinking about it though, I think that nature's grandeur does manage to outdo the glaring materialism. 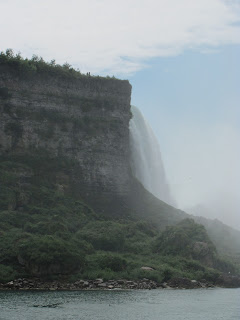 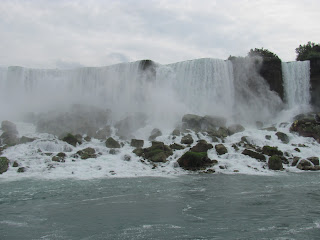 And, being tourists ourselves, we went to some nearby shops. We were barely inside when a rain and wind storm suddenly came out of nowhere. I was close to a door and saw monsoon-like rain fall and a strong swirling wind followed, whipping through the trees and sending people scattering for shelter.  We were glad we were inside at the time. It was over quickly though and when we headed back to our bus the rain had stopped and it was calm. 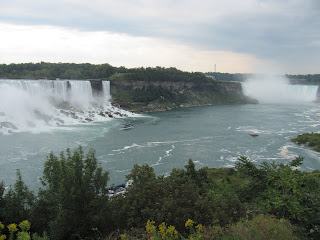 We left Niagara behind and after a short stop at the nearby Whirlpool Gorge headed for Niagara on the Lake. This a picture-book beautiful town, full of flowers and beautiful homes and expenisve looking shops. We passed Cows ice cream parlour and shop "The best ice cream in Canada!" well, we just had to try it! The first thing I noticed was a life-sized statue of a cow with a label around its neck saying "Caution! Bessie may mooove unexpectedly".  Inside there was a shopful of cow memorabilia - never before have I seen a shop dedicated to cows!  I loved the humour of it.  And the ice cream indeed was wonderful!
﻿
﻿

There were lovely shops, one had hundreds of wind chimes, I bought one.  Another had the most fabulous window display of homemade sweets/cakes looking too good to eat.  All around the streets were awash with the colours of the flowers.  We didn't have long there unfortunately, but it was nice to have a short visit to this lovely town.
In this part of Ontario there are lots of vineyards (we wondered how the vines actually survive the harsh Canadian winter, they must be special hardy species).  Our last stop on this trip was at the Pillitteri Winery for a wine tasting.  We had a very hurried lecture from a woman and had a tiny taste of white (nice) and  red (not so nice) wines.  It was all a whirlwind and a bit disappointing really, which was a shame as the winery has won awards.
After that it was time to head back to Toronto after a very busy day in which we saw so much.  The trip had been reasonable in price too, definitely money well spent.  If you are heading to Toronto yourself and want to take some tours I'd recommend the company http://www.kingtours.ca/
That night, as we'd had a busy day and were tired we ate in our hotel.  We had a lovely meal and wine, the Novotel Centre is a great hotel for the price you pay.  Good location, reasonable price, lovely rooms, excellent service.  Relaxing in wiht our wine was a great way to end our last day in Canada.
September 4th
﻿
﻿Our last day, and as we were not flying until the early evening we used the time we had left to go to the C N Tower which was only a short walk from our hotel and right beside the Roger's Centre where we will be seeing U2 next year!  I'd visited the tower when I worked in Canada all those years ago - it hadn't been open all that long then!  And it is still an elegant landmark in the city.  It was cooler and very windy and because of that the outside observation platform was closed for safety reasons.

It was expensive to go to the top of the tower and we had to queue for over an hour, but it does have fantastic views over the city and Lake Ontario so it's worth it.
And that was it really.  After that it was off to the airport for the trip back home.  We'd done so much on this trip, it was a fabulous experience on all fronts.  Canada was as wonderful as I remembered it and I kind of regret not re-visiting it sooner. But I'm making up for that by going there two years in a row now!  And I do really appreciate that I'm lucky enough to be able to do that.
Posted by Sue Fell at 23:22