Germany 4 - Hannover, The Aliens Have Landed

All photos in this post are (c) Christine Moeller.  Thanks again Chris for letting me use them. 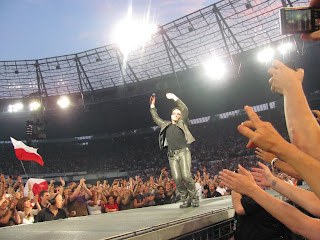 We treated ourselves to a taxi to get to the stadium, it actually turned out to be cheaper than if we had gone on the train and it was so much easier.

We waited where we thought the band would enter the stadium once more.  Again they arrived with a police escort, this time with sirens blasting!  I counted the luxury car convoy and got 14, but I'm sure I missed a few as I was also trying to see through the blacked out windows.  So no meetings again, during the 360 Tour U2 have definitely been
more distant which is a shame, but then again a meeting is a bonus, they don't have to meet and greet fans.


We had good seats 11 rows up the lower tier on Edge's side (we always seem to end up on his side).  We got talking to a girl who was sitting beside us, she had come by herself from Berlin and this was her first U2 concert. 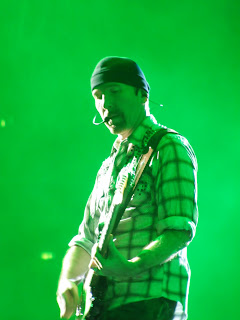 They opened the same way with Stingray and Bono doing a circuit of the catwalk doing his funny, clumsy "dance".  I just love it, such fun!  Still don't know what Bono shouts out every now and then, but he did finish with, "Achtung baby!" though.
The show followed the same set as Frankfurt, but the atmosphere was very up, Bono was in one of his jokey, fun moods.  At one point he started talking in an alien-like voice saying that they come from a "Little green planet called Ireland".  Then went on saying they had crash landed their space ship and needed to be re-built by German doctors and nurses.  He kept laughing and saying sorry but he couldn't stop himself, still speaking in alien tones he told us one of the nurses was at the concert and it was her who stamped made in Germany on his arse.  He introduced Edge as R2D2, Adam as Princess Leia and Larry as Darth Vader.  I've never seen Larry laugh so much as when he heard that!  Bono introduced himself as "The big hairy one".
It was just so funny, I've never laughed so much at a U2 concert.  Some of the general concert goers there must have thought what a strange accent he has!  Maybe he's on too many painkillers?? 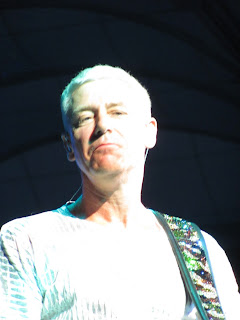 Glastonbury seemed more defined and it was easier to hear the lyrics as the sound was clear than at Frankfurt.  The ending to me sounded rather Vertigo-like.  "It's getting better," Bono said, "You don't mind us experimenting on you?" By now he'd dropped the alien accent
The original video to The Unforgettable Fire was there again I was pleased to see, it just works so well.  What an amazing song that is and the band were just very young men when they created it.  Bono said something in German before the song, and even to me it sounded terrible - my German friends confirmed that Bono's German is lousy and they found it very hard to understand
At the end of City of Blinding Lights Bono got a girl out of the audience and they walked, arms around each other, along the catwalk.   He took so long about it that he was late getting ready for Vertigo!  The band kept repeating the opening music and eventually Bono got in place saying, "Sorry, I was just giving her Spanish lessons  -  uno, dos, tres, catorce!"  This is the first 360 show that I have been at wher he hs got someone out of the audience.  I'd missed that because for me and most fans it is part of a U2 show, when Bono gets someone on stage we all feel like we are up there.
Crazy was more "evil" in Hannover, I think that was what I was missing in Frankfurt, the menace and rawness and that was there tonight.  Loved him yelling out "RRRRRRRiot!"

We had bought cheap binoculars at the stadium and they were great.  Now I can't remember the song but there's a point where Bono is on the bridge on our side and turns to walk back to the stage, well in complete unison Debbi and I raised our binoculars to view a tasty back view of Bono.  We looked at each other and laughed out loud!  Great minds. 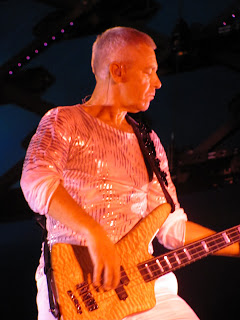 Streets was a uplifting as ever it's always mind-blowing to look round the crowd when this song is being performed, so many people singing, clapping, dancing in unison, it's certainly a special tune.  At the end of the song when they were preparing to leave the stage before the encore, Edge playfully threw a punch at Bono, who jumped back and laughed.
After the encore Bono mentioned that Paul McGuinness was born in Hannover "About 125 years ago."  He then went on to lead the audience in a rendition of Happy Birthday  for the band's "Friend and mentor" Wim Wenders who was going to turn 55 in a couple of days.
Then Bono continued, "I would like to...to" we could tell that he was distracted by something, he continued, "Just fix that speaker."  He then gave the speaker three hefty kicks before saying, "There it is!" with some satisfaction.
He then went on to dedicate Moment of Surrender to Robert Enke, a Hannover footballer who committed suicide last year.  The lights went onto Larry, he stood up and was wearing the local football team's jersey, this really seemed to strike a chord with the crowd and I actually found the song very moving that night. 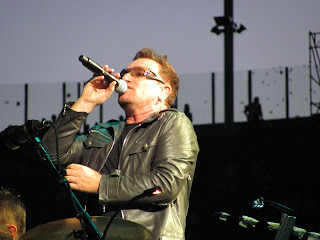 So that marked the end of 360 2010 for my friends and me. The girl from Berlin was radiant, smiling from ear to ear, she'd loved the concert.  I thought I'd be feeling sad that it was all over, but it had been such a fun, uplifting concert that we all left feeling animated and happy! 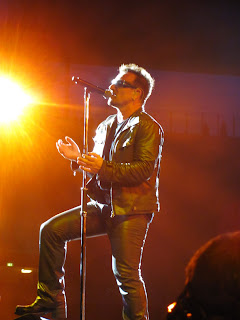 Frankfurt and Hannover had exactly the same set lists yet the shows felt very different.  The crowd were more receptive and enthusiastic in Frankfurt.  Bono was more ebullient and downright funny in Hannover and his mood transferred onto the crowd it was a real party gig.

During the Frankfurt gig I kept thinking Bono's even smaller than usual and couldn't work out why he looked different.  Then at Hannover I noticed that he had relatively normal shoes on, quite high heels, but fairly normal soles.  Maybe he had to wear those very thick soled shoes for his back problems rather than vanity.

Bono seemed back to his old self fitness wise, though Deb and I both noticed that once he winced and froze for a second when he was taking a big step up.  He also didn't run at all or get his leg over the bridge as he used to do.  He must have worked very hard to get well enough to do the tour, bless him.
We got the train back to the centre of Hannover and once back at our hotel opened the wine and nibbles and chatted about the gig.  We had our now traditional after the last show U2 quiz, it was close but Julie won.  It took us ages to come back down too earth after the gig!
Now we are already tentatively planning our next leg of  U2 360, 2011 in Canada.  I think that we will see a very different show next year (but I hope Bono keep wearing those trousers
Posted by Sue Fell at 22:21