Debbi, Julie and I met up at Manchester for our flight to Frankfurt, (we all live in different parts of England) we were all excited, we'd been anticipating this trip for such a long time.
The flight was pleasant and only about one and a half hours long.  As we descended into Frankfurt airport we saw the Commerzbank Arena (stadiums seem to be called arenas in Germany) below, the Claw being clearly visible, only the red spike was missing.  We noticed the stadium was situated within a forest, how unusual
I'd heard Frankfurt was a nightmare airport (it was certainly big) but we navigated our way through it wit no problems and before long were in a taxi heading into the city.


We arrived at the Maingau Hotel around 9.30pm and were greeted by a very nice receptionist and soon were settling into our rooms (we had single rooms) which were small, but very clean and had all we needed. Soon we were out looking for somewhere to eat, it was now 10.30pm and we weren't sure if we'd find anywhere still willing to serve.  But a short distance from our hotel we found the Trattoria i Siciliani, which was busy and ok about serving us.  As it was a pleasant balmy night we sat on the outside terrace of the restaurant.  The tables had candles in tumblers which in turn were in paper bags, erm, unusual....
Our pizzas were very good and reasonably priced compared to the UK (well almost everything abroad is reasonable compared to UK prices!).  We were fascinated by a tiny, tiny little dog sitting in a young girls handbag at the table opposite, so cute!  Another thing the UK could be better with, allowing dogs in public places more, like France, Germany embraces its relationship with man's/woman's best friend and dogs are welcomed in restaurants, bars and shops.  Nice. 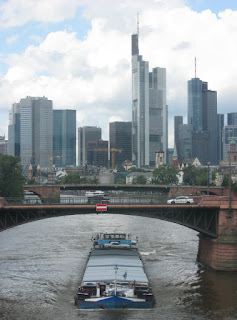 We had an excellent breakfast at our hotel before getting a taxi to the centre of Frankfurt for our tour of the city.  Unfortunately the weather wasn't too good, and though it was warm it was raining.  Everyone sat upstairs in the bus and we set off.  The guide was very funny and gave his info in very good English as almost all the passengers either were English speaking or understood the language.
He told us Frankfurt was over 1200 years old and was situated on the River Main.  It is the major financial and transportation centre of Germany, and it is the seat of the European Central Bank and many financial institutions.  I was surprised the city had so many skyscrapers, and it often is nicknamed Mainhattan because of its distinctive skyline.
The city suffered much damage in World War Two when it's famous medieval area, Romer, was destroyed.  Some of this area has been reconstructed as it was.  As the sun was now shining we decided to have a snack near Romer, but as we only had a short break we did not have time to explore the actual place, so we decided we'd go back there after the tour. 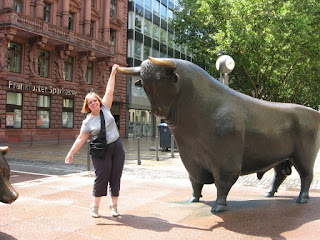 The retractable roof of the bus was taken back, and every time we passed low tree branches we got soaked!  We had "tree alerts" to try our best to avoid a cold shower.  But the weather steadily improved and soon we basking in warm sunshine. The photo lef tis me taking the bull by the horn!
After the tour ended, we got out our map and worked out how to get back to Romer.  We walked along with banks of the River Main, which was very pleasant.  Boats and barges chugged along the river and people promenaded or just sat and relaxed in the beautiful weather. 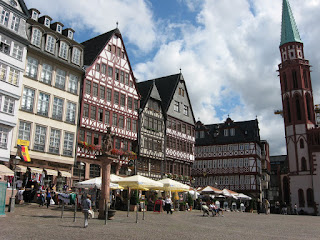 The Romer was lovely, I think it is good that it has been reconstructed.  Yes it was touristy, but at least part of Frankfurt's history has been recreated rather than it just disappearing into the ashes.
We decided to walk back to our hotel as it was just a short walk over the pedestrian bridge that spanned the Main River.  We had a slight delay and had to stand back whilst they filmed a short scene from a film on the bridge.
We rested for a while before going out to look for somewhere to eat, unfortunately the rain had started again.  We found nice Italian restaurant in the narrow streets north of our hotel.  It had lots of atmosphere, and a woodburning stove which produced gorgeous pizza, unfortunately I didn't take note of the name of the place.  We took our time, chatted and had two bottles of delicious red wine so we didn't really notice the rain on the way back to the hotel! 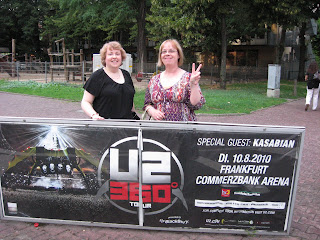 Is U2 playing Frankfurt?!  Julie and me in Frankfurt
August 9th
We decided to go check out the stadium today, Abroad we aways like to see how to get there in advance. We walked to the nearby Sud Bahnhof to get a train to the stadium - that's when our problems started.  I'd heard the ticket machines were confusing and boy was that true.  The stadium - stadion - was on the map but when we tried to find it in the price list it wasn't there!  We looked at other maps, until finally on one map it was marked as F-Stadion.  That worked, after about 20 minutes we had the right ticket!  We had to change trains at the main station, which is huge, again it took us a while to navigate our way through it, we breathed a sigh of relief when we finally sat in our seats.
The Stadion stop was quiet, surrounded by forest and we had a lovely ten minute walk through this forest to the stadium which you don't really see until you are nearly there.  There were already a few fans camped out in the blazing sun at entrance.  They must be dedicated and determined!  We found where we thought the band would arrive the next day, we wanted to see if we could met them when they arrived at the stadium.
We headed back and decided to have a meal at a place called Depot 1899 close to the station.  I had an unusual dish of chicken in a creamy horseradish sauce with apple, celery, carrots and potatoes, it was lovely.  We also tried the apfelwein that the Sachsenhausen area is famous for.  It's a kind of cider that can be taken pure, sour or sweet.  We got it pure, I probably would have been better with it sweet as I found it a little too tarty for my taste.  We sat for ages there watching life go by as the sun set and a balmy night fell, I just love living a different kind of life for a while. 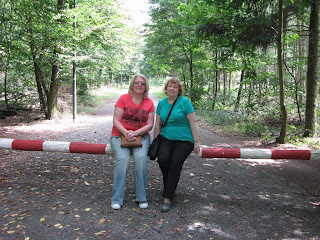 Debbi and Julie in the forest around the stadium in Frankfurt
Posted by Sue Fell at 19:30