We chose our beds over breakfast this morning - we'd stayed up until 3am celebrating seeing our first U2 gig of 2010 in our now traditional way - with champagne, wine and nibbles.  So next morning Debbi and I were feeling worse for wear, though Julie as usual was fine, she must have hollow legs!

We checked out and got a taxi to the main station where we would get our train to our next destination - Hannover.  Frankfurt had surprised me, I really like the place.  I don't know why, but I didn't expect it to be so green, have skyscrapers and lovely river walks. 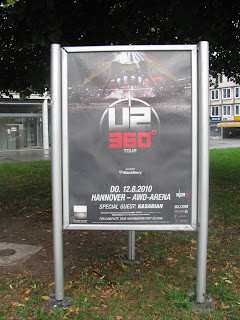 We had treated ourselves to first class tickets for the trip so were able to use the Deutsches Bahn lounge, a good strong German coffee helped Deb and I feel human again.  Our train left on time, it was one of the older trains so the first class wasn't that special, but it had been cheap so we didn't mind, at least I got my coffee in a proper mug rather than a cardboard one!
Our hotel was smack in the centre of the city, an ideal base.  After settling in we headed to the AWD Arena where the gig was being held the next day.  It turned out to be another lovely location for a stadium, lots of greenery and beside the Maschsee, a large lake.  We laughed at the amount of posters advertising the gig, hundreds and hundreds adorning almost everything standing!  A few hardy fans again were staked out by the entry gates, I didn't envy them.
We walked the short distance to the Maschsee and found an area at the head of the lake full of restaurants, cafes, bars, stalls, musicians.  Boats glided on the lake and huge fish snapped at the surface of the water hoping to find a tasty morsel.

Writing of tasty morsels we were peckish by now and thought it would be nice to eat here.  So we went into nearby Julian's Bar, sat in the outside eating area (it's such a treat eating outside for the English as we can rarely do that mback home) and had a lovely meal there.  It was a warm evening and we relaxed and chilled out as we looked out over the lake and watched the people passing by, a great way to end our first day in Hannover. 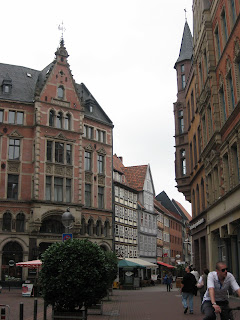 I woke up to the sound of church bells, something I love about being in countries like Germany.  This was our only chance to see a bit of Hannover so we walked the short distance to the old town.  It was a lovely area where I felt as if I'd stepped back in time.  Timbered buildings, cobbled roads, fountains, ornate stonework.
We went into the Marktkirche (market church) which was quite plain in design, but there was an amazing triptych behind the altar.  In one corner it showed how the church had been pre-war, more ornate with decorated ceilings.  Only the shell and some of the thick supporting columns were all that was left after the war.  During the restoration they incorporated parts of the old building into the new walls. 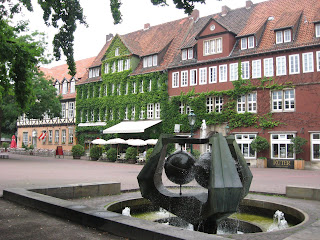 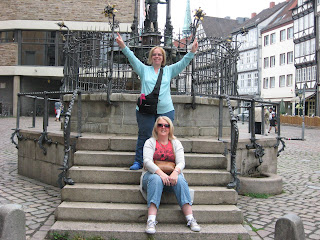