Iceland Part 2 - Enchanted Plains and the Language of Geysers

We set off on the famous Golden Circle Tour at 1pm, Steiner was our driver/guide once more.  We drove out of the city on a road that led us to the mountains.  Some parts were a bit like Cumbria, some like Scotland and some could only be Icelandic.  Sparsely inhabited, we could go for ages and until we saw a farm nestling in a hollow by a mountain. 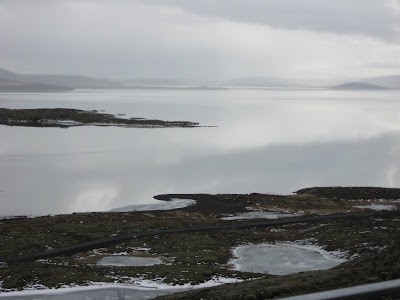 Our first stop was Þingvellir National Park.  This a plain surrounded by mountains and fractured rocks and there is a large lake called Þingvallavatn.  The lake's water was co clear and still that the mountains were reflected perfectly onto its mirror-like surface.  It took my breath away, an alien, desolate landscape of immense beauty.  The photo I took that I've added here doesn't really do the place justice.  It was silent and the air pure, magical.
The first Icelandic parliament (Þingvellir means parliament plain), the Alþingi was set up here in 930 and the General Assembly continued to meet there until 1798 when the seat of government was moved to Reykjavik.   Iceland has the longest continually running parliament in the world.
Now for a lesson in plate tectonics
Posted by Sue Fell at 00:01