Our last full day in Iceland, and we were up early  and picked up by the bus for our whale watching tour, this was something that both Glenys and I have always wanted to do. The weather wasn't too good, a threatening grey sky and little spits of rain, it was also markedly colder than the previous two days. 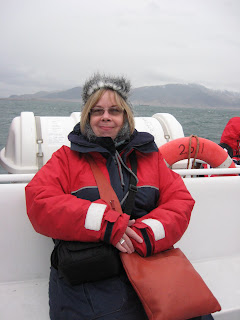 We arrived at the harbour and got onboard the boat.  On offer were all in one padded, waterproof suits, Glenys and I decided to have them.  Well, what a performance getting them on!  We already had quite a few layers of clothing on (in my case, knickers, tights, thermal long johns, jeans, thick socks, walking boots, bra, thermal vest, thick jumper and warm jacket and fleece gloves, chola hat - I am rather cold-blooded
There was a snug inside area, but we decided to go out onto the top deck.  We watched Reykjavik slowly disappear into the horizon as we headed out into Faxaflói Bay, the largest bay in Iceland.  Various types of seabirds swooped and glided over sea their wingtips almost touching the water, this was their world, and their elegance and grace was beautiful to see.
The guide spoke - in excellent English, as do most Icelanders - over the tannoy and told us they used a "clock" system for anything that she wanted to bring to our attention.  We were to look out for gatherings of birds, spouts of water in our quest to see a whale.
After about three quarters of an hour at sea the weather very quickly worsened, a strong, icy wind tossed the boat in the choppy sea and water spray shot over our upper deck.  I pulled hood of the suit up as far as I could and the only part of me that was exposed to the elements was my eyes, thank heavens for those suits!  It was almost impossible to walk so most people just stayed where they were in the wind and spray.  And, despite our hardy, dogged determination the whales were a no show today.  It was disappointing, but we knew a sighting wasn't guaranteed.  In the angry weather Iceland looked almost primeval and our little boat quite insignificant.  Humankind can be very arrogant thinking we have everything sorted to our satisfaction, but nature still is ultimately in charge in places like this.
Getting out of the suits was much easier than getting into them LOL!  But they did the job perfectly, the only parts of me that were cold were my feet and hands, the only parts not covered by the suit.  We disembarked, and as we walked along the harbour I tried to ignored the whaling boats on the other side of the quay.  It was a strange juxtaposition, on one side boats setting out to celebrate and watch whales and on the side boats setting out to kill them.

We got a taxi back to the hotel in order to take off all our thermal wear before going back into the city centre to do some shopping.  First we had scrumptious chocolate cake and coffee in a place called Sufistinn (it had said in our guide book that they are supposed to have the best cakes in Reykjavik and I think they must be right).

Iceland is a notoriously expensive place (even by British standards!) so we knew we wouldn't be buying much.   We went to the main shopping street Laugavegur and pottered round the places there.  Reykjavik doesn't really feel like a city, the centre is small by most city's standards, but I thought that was a good thing.  Down some streets you would get grand vistas to the sea or mountains.  It was very clean and hardly any litter.

By now the weather was miserable, drizzly with a strong icy wind.  We got a few souvenirs and then started to look for somewhere to eat.  We checked on prices, some were very expensive, some more reasonable, we settled on a modern place called Solon that was amongst the reasonable batch.  We had a lovely meal there and there was a good atmosphere in the restaurant.

We took a taxi back to our hotel and packed.  We had to be up very early next morning (4am!) for our flight home, so after a glass of wine (from a bottle we had brought with us as alcohol is unbelieveably expensive there) we had an early night.

4am, oh no.  Glenys and I are both not the best first thing so there was little conversation as we got our stuff together and boarded the bus to Keflavik.   At the airport we had to use self service check ins of which there weren't very many so it was a long wait to get to one.  Then almost every other person, including us, who used them could not get checked in!  So then you had to join the bag drop queue to check in the usual way.  It took ages and as I'm ratty anyway at such a ridiculous hour I was not best pleased!  Luckily security was fast and efficient.

Our plane was first going to Manchester, dropping off and picking up before going to Glasgow to do the same.  We thought that we would just wait on the plane, but no, UK regulations meant we had to get off the plane in Manchester, go to the transit area and through security before getting back on the plane!  I'm all for being careful with security, but this was pointless, we'd been screened in Iceland.  Or do the British authorities not trust the Icelandic security?

Finally we were back on the plane, in the same seats.  The flight to Glasgow was quick and there were some mutterings when the flight attendants announced that passengers going on to Iceland should just stay in their seats!  Ahh well.  At Passport Control there was a horrendous queue, it took about half an hour to get through, and then when we got to baggage reclaim our bags were not there!  Another 20 minute wait and they came through.  Then finally we were on our last leg home.

Iceland is an amazing place to visit for anyone who loves wildlife, nature and stunning landscapes.  For me there was a beauty in its dramatic volcanic vistas,  bubbling geysers, waterfalls, glacier sharp mountains and moody seas that I found both awe-inspiring and humbling.  Mother Nature is definitely still boss in Iceland and her "angry volcano" has recently told the whole world that!  Below is a fantastic photo taken of Eyjafjallajökull and the northern lights recently. 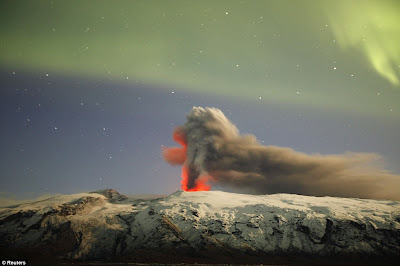