Iceland Part 1 - No Snow, But We Find a Pearl and a Smokey Bay

Glenys picked me up from home in the morning and we drove up to Glasgow, it was a nice morning so the drive was pleasant and there were no delays.  We parked the car, got the shuttle bus to the terminal and before long we were on the plane heading to Iceland.  The trip lasted just over two hours, my first view of the country was seeing the Blue Lagoon shimmering amongst the brown-black volcanic landscape, as I looked out that familiar excitement of arriving in a place I had never been before grew.

The terminal at Keflavik was very smart, lots of wood, slate and granite, obviously quite new.  We got our ticket for the Flybus to Reykjavik and headed towards the city approximately 40 kilometers away.  We were travelling through the Reykjanes Peninsula, a flat area in south western Iceland.  The land was desolate, the dark volcanic lava fields and wildly scattered rocks barren except for grey brown lichen that grew over some of them.  Often there were little cairns of rock built by people.  The road was very good and we passed many new roads that seemed to just disappear into nowhere.  I was surprised there was no snow - though we could see snow on the mountains that surrounded the perimeter of the plain.  It was a lovely afternoon, sunshine and blue skies, what a wonderful welcome Iceland was giving us!


We reached our hotel, the Loftleiðir, after a 50 minute journey.  From the outside the hotel was not inviting, it was like a 60s/70s building, not the most aesthetically pleasing to look at!  But it was completely modernised inside and was really lovely.  We had separate rooms and instead of small singles we both got a normal sized room which was great.  Mine looked out over the car park of the hotel, to the right, on a forested hill, was the famous Perlan (the Pearl).  I could see Reykjavik city centre with high snow capped mountains behind. 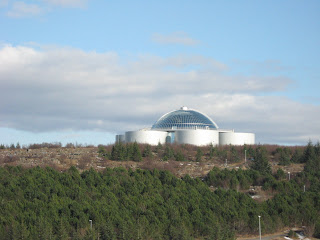 We decided to walk up to Perlan which was close to our hotel on a hill called Qskjuhlid .  The Pearl consists of six metal tanks around a central dome.  It is where the geo-thermal water from beneath the earth is stored and then pumped out to heat the Reykjavik buildings.  The dome changed colour with the sky and time of day, it was an impressive building.  We walked up wooded hill and into the building.  It was very modern, on the ground floor is the Saga Museum which at this hour unfortunately was closed.  There is a geyser that regularly soared up almost to the top of the building.
On the 4th floor there is a viewing balcony that surrounds the dome, the 360 views from there are breathtaking.   It was a lovely evening, sunshine and lots of blue sky that made the calm water of the bay a deep blue.  Below Reykjavik spread out looking very pretty with it's white and bright coloured buildings and church spires, all flanked by dramtic mountains. 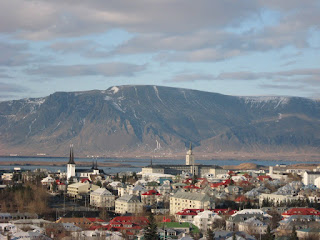 Also on the 4th floor of Perlan was a cafe (unfortunately we could not afford to eat at the plush restaurant on the 5th floor!) and by now we were really hungry.  We had a lovely meal that was not too expensive.  We sat by the window looking out over Reykjavik - this cafe must have one of the best views in Iceland.
The darkness comes very slowly at this latitude, and it was still light as we walked down  Qskjuhlid.  We passed close to one of the many "hot holes" of Iceland from which steam was rising into the air.  In shady corners small areas of snow still lingered and as the sun got lower it got decidedly cooler.

Next day we had a couple of tours, the first, in the morning, being a tour of Reykjavik.  The city centre is compact and I was surprised to learn that the city is not that old - by European standards.   The first settlement in the area was around 870 when Norseman Ingólfur Arnarson arrived.  However there was no urban development until 1786 which is recognised as the date of the founding of the city of Reykjavik (which translates to Bay of the Smokes, referring to the geothermal geysers in the area).

The houses tended to be either white or greens, blues, yellows and most had a outer cover of painted corrugated steel.  Our guide, Steiner, said that rooves and walls are covered in this as other materials do not cope well with Icelandic weather and they found this material serves the purpose well. 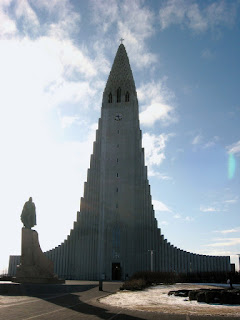 The city was much more open than I expected, it is very spread out with a lot of new building going on, it's still developing.  We saw the Parliament building and drove through the oldest part of the city which was very pretty.

Then we went on to the Hallgrimskirkja, which is the building you see from all over Reykjavik and beyond, situated on a hill and soars 244 feet into the air.  It was begun in 1945 and finished in 1986.  It is one of those few examples of a 20th century building that is stunningly beautiful and unique, that will be treasured for a very long time.  The architect, Guðjón Samúelsson, is said to have designed it to resemble the basalt lava flows of Iceland so much part of Iceland's landscape.  It is the Lutheran parish church of Reykjavik.  Inside it is very simple, almost bare, this made the one stained glass window really stand out as the sun shone through it, it was gorgeous.  I think it is one of the most beautiful churches I've seen.

We drove a little outside of the city to Bessastaðir, the residence  of Iceland's President.  It was situated on a flat area of land close to the sea.  What I noticed most was the silence there, so, so quiet and peaceful - except for the calls of the geese that were flying in for the summer and landed close by.   I can imagine the weather can get wild there as it is very open, but on this sunny day it looked a lovely place to live.

After that we drove back into Reykjavik and our tour ended.  We had an hour and a half for lunch before we went on our next trip.  We sat in a lovely little square in the oldest part of the city for a while enjoying the sunshine before going to look round a few shops and then had a delicious coffee in a place called Sufistinn.  Then it was back to the bus for our afternoon trip.

Next instalment to follow soon.
Posted by Sue Fell at 01:00