Well night owl me stayed up to watch this (it was on from 1 - 3am in the UK).  I thought it was done well, and there were some good performances, I especially liked Justin Timberlake's version of the wonderful Hallelujah (which must be one of the most amazing songs ever written).  Bono and Edge appeared on stage with Jay-Z and Rihanna.  Jay-Z took the lead with a rap, Bono and Rihanna were kind of backing singers, but Bono's mic was turned so low you could hardly hear him and I'm not a fan of Rihanna's shrill voice.  That put together with the fact I don't like rap meant I didn't really enjoy the performance.  I have to say though Edge's guitar was lovely, but he was hardly shown on camera.  The chorus of the song (called Stranded) was pleasant and melodic.  I've heard that you can hear more of Bono's voice on the iTunes download of the song.

I don't know why the likes of Bono and Edge do collaborations with rappers and R & B singers, rock doesn't mix well with those genres.  But I think they probably do it in an attempt to be more relevant to the youngsters who U2 seem so desperate to have on board.  These guys are having the longest mid-life crisis going I think!

I feel a little bad about being a bit negative about the performance, it wasn't bad, and after all it was done for a good reason, but it is my opinion.  I seem to be moaning about U2 a lot recently, maybe I'm becoming a grumpy old woman LOL! 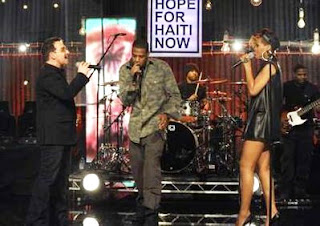