A Walk in Swineside (It's Nicer Than It Sounds!)

We've been enjoying an Indian Summer, the weather has been sunny and warm and I've been out and about a lot to make the most of it before the winter sets in. The other day I set off for Mungrisdale and Caldbeck Common close to the Lake District (but no where near as crowded!). I'd discovered this area by accident when my friend Dianne was staying with me and we took a shortcut home along a road I had never been on before. It was gorgeous there and we met the friendly little fell ponies that wander over the common for the first time.
My friend Kath had told me about a place very close by called Swineside, so I decided to go there and explore. I turned right in the village of Mosedale and drove along the narrow road into a valley flanked by Carrock on the right and Bowscale Fell on the left. The fledgling River Caldew (the source of which is Skiddaw mountain not far away) ran through the centre of the valley. The fells were just changing into their Autumn colours, the bracken was turning rust red and there was a whisper of lilac as the heather started to bloom - a couple of weeks later and the rust red and lilac would be stunning. 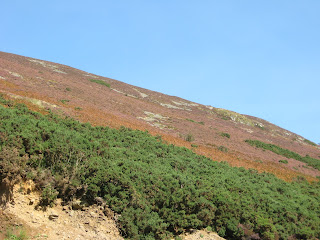 The road gently eased to the left still following the valley, and new mountains came into view -Coomb, Great Calva and the instantly recognisable Blencathra also known as Sabbleback. You can continue along the valley on foot along a very good bridleway. This is exactly what Pepsi, Max and I did. There were a few other people walking too, but not many and it was incredibly peaceful. I'm not a religious person, but I am spiritual, and I always feel a spirituality about places like this - nature to me is better than any church, and there is a permanence about places like this. I find it humbling to walk in such a beautiful place and know that I am following in the footsteps of generations of other people who saw the same river, mountains and fells. Some of these people will not have felt like me, these places were only really opened up and romanticised in the 19th Century, before that they were considered harsh and scary. The mountains can still be harsh and weather unpredictable, but in the modern world that has made places more accessible, we have learned to appreciate the powerful beauty of nature.
It was the perfect day weather-wise, warm and sunny, the Caldew bubbled over its rocky bed close by, otherwise there was no sound, so rare is our hectic world and I loved it! Don't get me wrong, I wouldn't want to live in an isolated place, but I love visiting them. 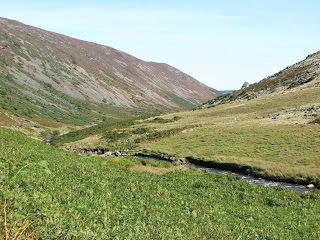 Afterwards I drove the short distance to Caldbeck Common as I had some apples for the ponies (last time they had nuzzled our pockets so they are used to being fed!) A few ambled across and let me stroke them and wolfed down the apples. They were very sweet and cute, short and stocky with rough haired coats and manes that hung over their eyes - they'll need that coat to protect them when the weather becomes colder, the common is very open and I'm sure the wind whistles through there at a pace. But those ponies may be little, but they look tough too! 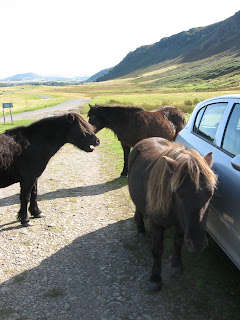 So that was my day at Swineside (wonder how it got that name?). Simple, but very enjoyable, it's always good to discover places near to where you live that you fall in love with and will visit again and again.