Thursday 16th July 2009
We got up a lunch time as we hadn't got to bed until almost 5am after the U2 show the previous night. We decided in advance on a very lazy day today as we knew we'd have to recover form the rigours of attending a stadium gig!
After a slow awakening we walked the short distance to the bus stop on the Port, today we were going to Eze-Bord sur Mer. The fare anywhere along the route, which went as far as Menton, was one Euro, amazing!
The journey was great in itself and I thought rivalled the Amalfi Way. Hugging the coast for most of the trip we travelled through Villefranche, Beaulieu sur Mer and onto Eze. As you approachedEze sheer cliffs soared into the sky and the road was literally cut into the rock, ve 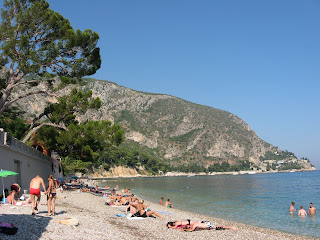 ry impressive. It is a small place bordering the Avenue de Liberte and the railway line with a backdrop of hills and cliffs, and a crescent azure blue bay, a very beautiful setting.
We soon found our way to the beach, which is public, by crossing the railway line that you weren't supposed to cross but everyone did. We followed a little lane down to the beach. This was where most of the grandest houses were and Debbi and I recognised Bono's house. We walked along the fairly busy pebbly beach and found a nice vacant spot in front of it. The house is literally backing onto the beach and the outside areas appeared to be not very high above it, not that private really and we occasionally could hear people talking up there 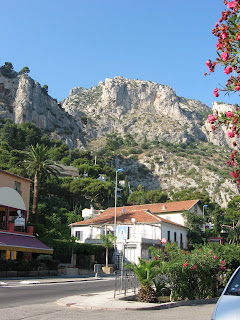 .
We settled down and relaxed. Even with the people there (many of which were obviously U2 fans) it was restful and we just lay down and chilled for a couple of hours. It was a great way of recovering from the strenuous day of the gig (this touring lark gets harder as you get older!). We all regretted not bringing our bathing costumes though as the sea looked very inviting!
Afterwards we walked back to the main road and had a much needed ice cream and drink at a roadside cafe and just soaked in the atmosphere. We commented that it had a bit of the feel of Killiney in Ireland, though was on a grander scale and has better weather!
We got the bus back to the Port in Nice and went home. It was an eat in night for us so I made the dinner. Later we walked up the Place Garibaldi and had a bottle of red wine watching the night life of Nice pass by.
Friday 17th July 2009
We'd put off a trip to Monaco twice earlier in the week so today was our last chance. But Julie wasn't well, a touch of diarrhoea. Once we knew that it was nothing more serious than that and it had settled a little Debbi and I left to get the bus to Monaco. Unfortunately the bus was heaving with people and we stood a lot of the way. I'd been looking forward to just relaxing and admiring the scenery en-route but there was no chance of that as I stood wedged between passengers.
Monaco was noisy and very built up, it had a different ambiance to Nice and I didn't really like it. First we stopped off and had a snack and drink. Then Debbi and I walked to the famous aquarium housed in an impressive building built into the rock overlooking the sea. The entrance hall had very grand decor, all based on the ocean. The aquarium itself wasn't that exciting, in fact we were disappointed with it. And the rest of the museum was not that interesting either plus the place had the worst toilets we'd been in on that trip, they stunk! Yuck, you don't expect that somewhere like that. The views from the viewing terrace at the top of the building were wonderful though. Below is a photo of the Oceanographic Museum. 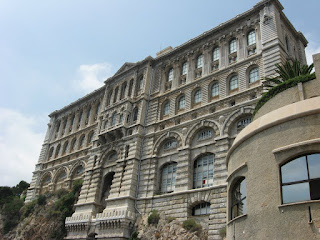 After that we headed back for the bus stop as time was getting on and we were eating out that night. I think we were both ready to leave Monaco, neither of us were enamoured with it.
We waited ages for a bus and then two arrived at once! By time everyone was crammed on you could hardly move. Needless to say for a while neither of us had seats and unfortunately I was unable to appreciate the wonderful scenery once more because the bus was so full. And it was so hot in the bus, at first the driver didn't have the air conditioning on, she must have been a sadist or something! The sweat was running down my
face and trickling down my back. Eventually someone asked the driver to put on the air con and almost immediately it cooled slightly. I think we were dehydrated when we got off the bus as though we were only minutes from our apartment all we could think of was "drink!" and we had a Coke at a cafe at the Port.
Julie was feeling better when we returned and had been able to eat a little which was good. We got showered and changed ready to go out for a meal. Unfortunately Julie felt unable to come with us and decided to stay in the apartment. We left and went into the Old Town to a restaurant we had seen a few days earlier called Le Barbecue. We got a table and once more went for the set menu. We had the most delicious fish cakes to start, they were so much better than ours! For our main course we had sumptuous barbecued steak and delicious home fries. I only had room for ice cream for dessert
We got talking to a couple at the table beside us. He was from Italy and it was his 74th birthday that day, Debbi wished him Happy Birthday in French, I was most impressed with her! The woman was about my age and a designer, she had a fashion shop nearby and invited us to go to see it the next day. Unfortunately as we were leaving the next day we didn't have time to do that. But it was nice talking to them, everyone we had met in Nice had been very friendly. 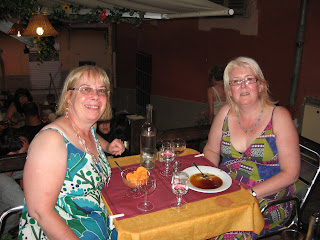 Me and Debbi at Le Barbecue, Nice Old Town

After the meal we walked to the sea front and promenaded like everyone else was. It was windy but it was warm, the palm trees rustled, the cicadas "chirped" and the waves broke on the rocky shoreline. The lights of Nice swept in an arc around the bay, people walked, sat in huddles on the beach, played music, no drunks, no hassle it was lovely. We walked on past the war memorial, lit up with the colours of the French flag and along the quays of the Port. It too looked almost unreal with all the lights dancing on the water and shiny decks and hulls of the luxury yachts. I don't know what it was, but you know every now and then you get a time when everything seems perfect? Well that evening was like that for me, good food and wine, great company, a beautiful place to walk around, simple things really, but all together they made such a special evening for me. Nice has captured my heart and I can't wait until I go back there again.

So that's it, my time in Nice. I've written these articles quickly as I wanted to get them done before I have a whole load of other stuff to share about Dublin - I'm off there this Friday. So please forgive any typos or bad grammar.