We stayed in the apartment this morning as we were waiting for Julie's case to be delivered. It duly arrived at 12:30, and Julie was delighted to be reunited with her belongings. After she'd had time to sort out a bit we decided to go into the centre of nice and do a sightseeing trip. The tram we were going to get left from Place Garibaldi, but on our way we saw a gorgeous patisserie/chocolatier shop - we just had to indulge! And boy, the little expensive cakes were works of art beautiful to look at, subtlety flavoured and worth every Euro.

After that diversion we finally got to the tram stop. We thought you bought the tickets on board but we'd missed seeing the ticket machine on the platform. Luckily an inspector didn't get on during the short journey. The fare was 1.30E to any destination, very cheap and the trams were modern and left every six minutes. 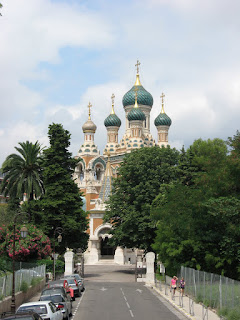 We got off at Place Massena, a very large square just off the Promenade des Anglais. We knew where the tour started from and we walked there. We sat on the top of the open decked bus and set off. First we headed back the way we had come, past the Old Town and Port and onto the road that does a loop around Mount Boron on the Cap de Nice. There were some fabulous mansions in the hills over looking the Port including one that was very eccentric looking, Indian influenced and had been built by an Englishman. The views down to the Port and city were wonderful.

We went round and back towards the city and up into the Cimiez area where there was a Matisse museum. We continued on and heard about all the aristocratic Russians who had moved to Nice at the time of the revolution and many built very grand homes. There is even a beautiful Russian cathedral in the city that we passed by.

Finally we drove along the famous Promenade des Anglais, so named because it was built by the British. To be honest I was a little disappointed in it. The pebbly beach was covered with sunbathers crammed together like sardines, you wouldn't get me on there! We passed the famous Hotel Negreso, a lovely building that is still as exclusive as it was originally intended to be.

After the trip we walked back up to Place Massena. We had the most delicious Italian ice cream ever, mmm. Nice was once part of Italy and only ceded to France in 1860 so there is a strong Italian influence in architecture and food. Nice has it's own language, Nicard, that is being resurrected. All the street signs are in both French and Nicard, the latter bearing a strong similarity to Italian.

We went into the famous Galeries Lafayette store. It wasn't as grand as the one in Paris but still large and bustling as the sales were on. We spent ages searching for the toilet there and eventually had to ask and found it hidden away in little corridor.

We walked on along Ave Jean Medecin, Nice's main shopping street and wandered into a few shops. It was tempting to buy things but after all we had spent on the U2 tour we were quite sensible for once and didn't buy anything! We noticed lots of signs everywhere offering U2 tickets for sale.

After a while we got the tram back to Place Garibaldi (paid this time!) and walked home. We were eating in tonight and I was cook. Afterwards we sat and chatted. There was no TV in the apartment which I found really good, it encouraged us to communicate more. We did quizzes and had some good laughs. 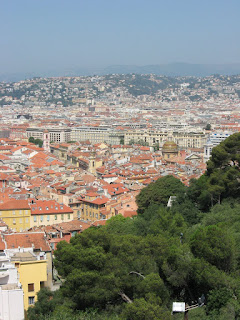 On the sightseeing trip the guide had said that there was a lift to the top of Castel Hill close to our apartment so we decided to explore there. We found the lift ok and soon were up at the top of the hill, which was the original settlement of Nice. It was an oasis up there, lots of cool shade from the abundant vegetation, a large waterfall the spray of which was very welcome! Play areas for kids, a cafe, shops, lots of seats and fabulous views down over the city and sweep of the bay on one side and the Port on the other. It was quite windy so even in the sun the heat wasn't too overpowering.

Afterwards we walked back via the Port and saw boat trips advertised so decided to go on one. They told us that because of the wind the trip might not go but we put our name down and were told to be back by 14:40.

We went to an Irish pub on the other side of the Port for a late lunch which was very good. The boat trip was on and soon we were sailing on the slightly rough Mediterranean. The route took us around Cap de Nice in the horseshoe bay and Villefranche sur Mer. It was beautiful, mansions littered the hillsides, the bay was full of boats, some very luxurious and even a cruise ship. The guide pointed out the luxury homes of the likes of Bill Gates, Mick Jagger and Tina Turner. The rich know where to live! 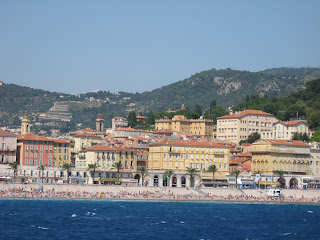 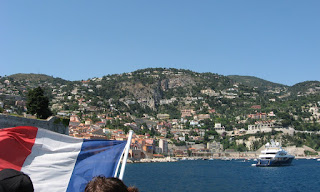 We did a loop in the bay and then sailed back towards Nice before turning and following the Promenade des Anglais back to the Port. It's always nice to see a place like this from the sea, you see a whole new perspective.

That night we were going out for a meal and we'd already picked a restaurant, Le Lunel on the Port. We had one of the set menus, again excellent value. We had Kir to start, I had we all had goat's cheese salad to start, sea bass in saffron (yum!) for main and I had apple pie to finish. We got a bottle of very good red wine in with the set meal, all for 25E, excellent value. A relaxing way to end a busy day. We were all excited about the U2 gig the next day!
Posted by Sue Fell at 22:23