Saturday 11th July 2009
I've always had this excitement when arriving somewhere I've never been before, and as I looked at the beautiful Riviera coastline below as our plane descended into Nice I felt that feeling bubbling up in me. All the planning was over, it was time to enjoy!
The heat hit Debbi and I as we stepped out of the plane. Our friend Julie had arrived before us, but she had bad news, her luggage hadn't arrived with her! We waited as she reported it missing and then got a taxi to our apartment. The driver, Jean-Marc, was very chatty and gave us a commentary on places to see in the city and surrounding area for the full twenty minute journey!
I watched the new city whizz by, bright buildings framed by blue sky. Mountains and cliffs to the north and east, a dramatic setting. We arrived at our apartment in Rue Antoine Gautier, close to the Port and Old Town of Nice. Jean-Marc gave us his card and we saw more of him during our holiday as he became almost our personal chauffeur! 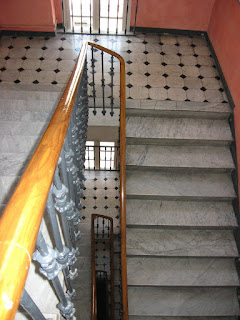 The apartment manager, a chatty Australian called Mike, was waiting for us. We entered the large, old green double doors into the stairwell which was tiled and had grand marble stairs, very French. Unfortunately we were at the top of the 65 stairs, but we somehow managed to haul our cases up.

The apartment was lovely, with an open plan living room/kitchen/diner, two bedrooms and a bathroom. It had the original hexagonal terracotta tiles on the floor and old-style double windows with the faded green shutters you see all over Nice. It had a nice feel to it.
The apartment belongs to travel writers who are away a lot and it has lots of their things still there so it felt homely. It had an eclectic mix of paintings and prints on the walls, various knicknacks and a good selection of books. Some of the things had value (eg an Ipod sitting in the dock) so there was a degree of trust involved when staying there - something that had attracted me to the apartment in the first place, trust is a rare thing between strangers nowadays. 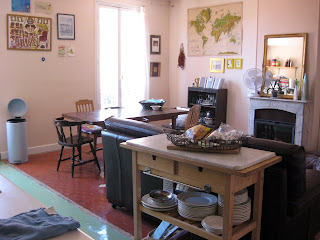 We soon were out again looking for a supermarket in which to get our supplies in and found a Monoprix on Garibaldi Square just up the road. It was a beautiful square with it's fountain around a statue of Garibaldi and colonnades on all sides.
We got everything we needed and headed back. But we took a wrong turn and ended up in the Old Town. Now the Old Town is lovely, but not whilst carrying very, very heavy bags! We walked and walked having no idea where we were. We were going to have to ask for help, I practised my French for the first time to ask directions to the Port as we knew we were near that (yes, yes, we stupidly left the apartment without the map of the city Jean-Marc had given us!). The guy I asked looked mystified for a moment as I'd used la instead of le so was asking the way to la porte - the door - LOL! But he cottoned on and very helpfully gave directions back to me in English and we finally headed in the right direction. 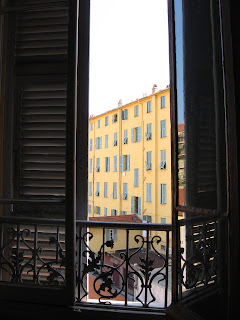 We walked out of Vieux Nice and onto the seafront beside Castel Hill. We stopped for a rest at the beautiful war memorial that was built into the rock of the hill as our arms were aching, we were weary and very hungry. By now it was dark, but we could see the Port now and knew our ordeal was nearly over. Soon we were plodding up the marble steps to the apartment.
We made a meal and toasted to a great holiday with red wine. We lent Julie clothes to tide her over until her case was (hopefully) returned, then we just relaxed and chatted and didn't go to bed until 4am!
Sunday 12th July 2009
We had a "lazy" day today and after a very late lie-in we out to explore the area around our apartment. We wandered down to the Port and looked at the luxury boats there, one even had a helipad on it! Some of them must have cost as much as the gorgeous mansions on the hillside above the Port. How the other half live! 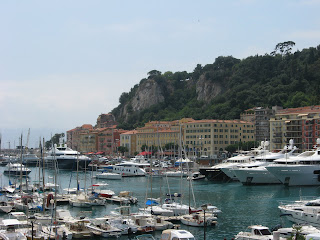 It was very hot and I was hoping that I could cope with the heat. Like a vampire I kept in the shadows as much as possible
That evening we decided to eat out in the Old Town. The Old Town is almost like stepping back in time with streets and narrow lanes meandering in all directions, no wonder we got hopeless lost the previous night! But it was a lovely place with loads of atmosphere. I was surprised to read later that until only a few years ago the Old Town was a no-go area. Now it is safe and we felt no threat wandering through it.
There were so many restaurants that it was hard to choose. Some parts of the hotel a very busy, he 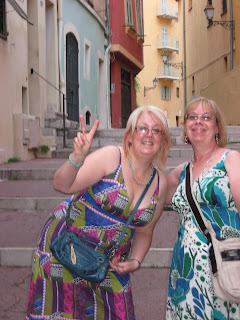 aving with people and we didn't want that. In the end we found a restaurant called La Mama in a quieter but atmospheric area.
People had told me Nice is very expensive, and it's not cheap, but if you go for the set menus when eating out you get excellent value for money. This is what we did that night and we had a fantastic meal - I had a gorgeous steak for my main and it was so tender and cooked to perfection. It was lovely to be able to sit in comfort outside in the balmy night eating and drinking, chatting and people watching. We took our time with our meal just soaking up the atmosphere and sinking into the French way of life. I already new that I loved this place.
Posted by Sue Fell at 11:44