Three Friends, One Album And U2

I've had a few days off blogging as my good friend - and fellow u2 fan and blogger - came to stay for a few days so we could listen to the new U2 album together for the first time. There was a real glut of U2 appearances in the UK last week both on radio and TV which was a treat, so much after years of so little from our lads! Now the PR focus has moved across the Atlantic and I'm left with the new album for my U2 fix. 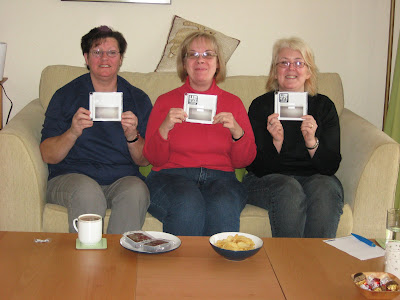 As we listened I wrote down my very first impressions and feelings about the songs and that's what I've put here. I know my opinion will change as I listen to the album more, (and I will write an updated review in a while) but I want to convey what my very first views of the album was, so here goes!

No Line On The Horizon

I'd seen the live performance of this song already on The Culture Show and absolutely loved it on there and I feel the same about the album version. This is exactly how I love U2 to be, it has the passion, rawness and energy reminiscent of Mercy, a song that's a firm fave of mine. Great insistent, almost punkish guitar. Bono's voice a bit raw and rough round the edges, breaking with emotion. When Bono sings this way it touches me deep inside, I love the sheer abandon of it. And the song really rocks.

I'd seen this live too on the BBC rooftop performance, so it was not entirely new to me. Wonderful Edge guitar work, that vintage "waterfall" effect. This for me is the most classically U2 sounding song on the album. At one point Bono's woo hoos blend into Edge's guitar very much as happens With Or Without You. Gorgeous, soaring song.

Back to Bono's raw singing here, he is in amazing voice on this song. It has a very strong baseline and Edge plays as I've never heard him play before. There's a blanket of sadness hanging over this song. It is very long, maybe too long.

The beginning reminds me strongly of Bad. The chorus vocals don't sound like U2, who is singing there? This song doesn't do much for me at all.

This song has a strong vocal, think this one will grow on me, not sure at the moment.

Get On Your Boots

I've already written about this in an earlier post so won't write more now.

I hear touches of The Fly at times here. Quite a rocker, could be great live I think. I found it a bit disjointed, but think it will be a grower.

Strong Moroccan influence, the wailing intro reminds me of the iman calling the faithful to prayer from the minaret. I feel Eno's influence here is very strong. The most experimental song, not sure if it works for me.

This is adapted from a traditional song and that is easy to hear, I like that. Beautiful song, Bono's voice is so wonderful nowadays, rich and full-bodied like a vintage wine, but with a slight roughness to it.

I'd heard this song twice before on the Jo Whiley and Jonathan Ross shows and wasn't that keen on it then. But on listening to it on the album I am warming to it. Think it will be good live and that it will grow on me more.

I feel this song is more of an impression, a narrative than a song. It didn't really do much for me on the first listen.

So there we are, my brief first impressions of the songs on U2's album. Overall thoughts I have are that it is a brave album, it's not instantly commercial, it needs to be worked at and really listened to, it definitely is a grower. It is different to all they have done before, yet frequently there are touches of songs from their past within the new and that just seems right somehow.

It will take me time to get used to Bono writing in the third person, I am so used to him bearing his soul to us lyrically, but here many of the songs are in the third person and that feels different to me. A pall of sadness seems to hang over much of this album.

Edge's guitar work is as fabulous as ever, and we are hearing a lot of new stuff coming from him on this album. As I've mentioned before, Bono's voice here is wonderful! It has a richness, maturity and passion that is captivating.

I am pleased U2 have given us a release like this, after two good but "safe" albums I was wondering whether they had the guts to go out on a limb, were they still willing or able to experiment? This album shows us they still have the balls to be different and to show all the others how it's done. Whether it will be a big hit I'm not sure, maybe it's not commercial enough, but it certainly is a hit on an artistic level.
Posted by Sue Fell at 17:52

Email ThisBlogThis!Share to TwitterShare to FacebookShare to Pinterest
Labels: Bono, Brian Eno, Edge, No Line on the Horizon, U2