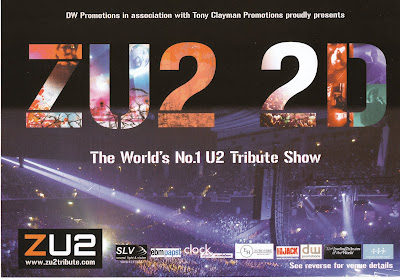 Ever since our favourite U2 tribute band NU2 split up earlier this year my friends and I have missed seeing a U2 tribute band every now and then for a fix of U2 music. So when my friend Dawn asked if I wanted to see ZU2 I jumped at the chance.
They were playing in a small Scottish town called Langholm, not that far from where I live. I met Dawn there and fist of all we decided to have a meal. Langholm closes in the evening and there were just two places open. The first place we walked into seemed to have been suspended in the late 70's, complete with garish, flowery carpets. We walked into the bar and there were three people in it who all stopped talking and just turned and stared unsmilingly at us. Dawn and I looked at each other and turned and walked out!
A short distance up the street was the Douglas Hotel and we went into the restaurant there. It was lovely, modern, full of people with friendly staff. We had sausages and mash which was absolutely delicious.
After this we drove the short distance to the Buccleuch Centre where the gig was being held. The venue was small but very nice, modern with a bar and large seating area and spotlessly clean toilets. The auditorium too was small but comfortable and perfect for the gig.
ZU2 came on at 7.30pm. The beginning of the show was based on the Popmart Tour opening with a screen at the back of the stage showing various graphics accompanied by Pop Muzik by M. It all brought back the feeling of excitement I'll felt at the real Popmart shows as this opening number blasted out. Can't believe all that was 11 years ago now!
The band came on and started with Vertigo. They were very good, and "Bono" was very like the real thing from the side with his glasses on. He had a good voice too, again very close to the real Bono's. He had Bono's movements off to a tee, all the little nuances were there.
The band did a very varied, well-balanced set which included surprises like When I Look at the World and Spanish Eyes - it was really nice to hear them played live. They did a scintillating Bad which gave me goosebumps! Just before the interval the band asked the audience to write down any requests during the break and hand them in at the merchandise stall and then the band include some of the requests in the second half of the set, a really good idea.
ZU2 are a full time tribute band and are very professional with the screen at the back showing animations throughout the show and very good lighting too. They even had souvenir tee-shirts and CDs for sale as well. I really enjoyed the gig I'd recommend them and would definitely go to see them again.
Posted by Sue Fell at 15:22