U2 - A Diary, Interview with Matt McGee 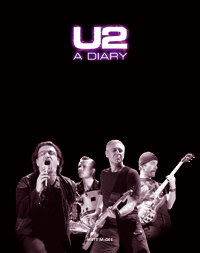 A lot of you will know of Matt's great U2 website @U2 which has kept us U2 fans entertained and well informed about the band for many years. Matt has now written a book about the band called U2 - A Diary which will be published around 13th October 2008 and is now available for pre-order on Amazon. It sounds like a brilliant book by a fan for fans, I'm really looking forward to getting it.

Below is a short interview with Matt where he answered some questions I put to him which I'm sure will help you get a feel of what the book is all about.


1. How long have you been a U2 fan, and what made U2 stand out for you when you first became aware of them?

I first heard and liked U2 in 1981, when WMMR-FM in Philadelphia played "I Will Follow" occasionally. What stood out then was the same for me as it was for a lot of people: Edge's guitar. The song sounded totally unique compared to the other rock music that was getting airtime. But I didn't go out of my way to find the BOY or OCTOBER albums, and it wasn't until "New Year's Day" that U2 had me hook, line, and sinker. I'm a sucker for any rock song with a piano, and that's still one of my all-time faves. I bought the WAR album, started to read up on who these guys are, and the fact that their music had substance and meaning also stood out then. So, it was about 1983 when I stopped dating other bands; U2 was the one for me. I made a good choice!

2. You already run a U2 fansite, @U2, writing a book is a massive undertaking, what made you decide to write U2 - A Diary?

It was a pretty easy decision, because I've always considered myself a U2 historian and am fascinated by their development year-to-year, album-to-album, and so forth.

Thanks to @U2, I had an idea for a different book in early 2005. The idea was pretty well developed -- with great help from the @U2 staff, I should add -- and I was pitching the book to a few agents and publishers. One of the publishers high on my list was Omnibus Press, because of their experience doing books for the U2 audience. (They've published U2 Live-A Concert Documentary, U2 Touch the Flame, and others.)

Omnibus wasn't too keen on the idea I was pitching, but they had done a popular "Beatles Diary" book and had an idea to do one about U2. They asked me if I was interested in writing that book, instead, and I jumped at the chance! We already had a U2 Timeline feature on @U2, which was my favorite part of the site, so it was a perfect fit. The timeline was a big help getting started, but ultimately only makes up about 25% of the book. What we had online was about 50,000 words, and the book is just over 200,000 words -- so, it grew quite a bit.

3. How will U2 - A Diary be different from other books on the band?

I hope the main difference readers recognize is that it's written by someone who's a fan first, author second. As a fan, I have ideas and opinions on what matters and why it matters -- things that a journalist or author may skip over, or even things that the band themselves didn't discuss in U2 by U2, which I think is an amazing book. But as great as it is, I don't think it's the full story. As an example, in U2 - A Diary, you'll read a quote from one of the bands that U2 beat in that 1978 talent contest in Limerick, Ireland. The guy says no one could believe U2 won! It's a great quote and adds something new to the story we've all heard about that important day in U2's development.

4. Did you have any direct contact with any of U2 whilst writing the book?

That depends on how you define "any of U2." :-) Early on, we notified Principle Management that the book was being written. During research, on a couple occasions I contacted some of the band's associates to confirm a date or fact; one was when I contacted Willie Williams to confirm the date of his first U2 concert, for example -- little things like that. And then we had some contact with Principle again during photo research, and they were helpful with putting us in touch with some photographers.

5. Does U2 - A Diary cover U2's career worldwide or does it mainly concentrate on the USA?

Worldwide for sure! In fact, that was one of the real challenges during research -- finding old newspaper and magazine articles from other countries. We have a great archive on @U2, but it's nowhere near the full breadth of worldwide news coverage on the band. But what was amazing was how fans chipped in with articles from their own collections and research that I couldn't do on my own. A guy named Donal Murphy in Ireland actually made several trips to his local library to look up old Irish news articles on microfiche ... a guy named Scott Cleaver in New Zealand shared some great material related to Greg Carroll's funeral ... and on and on and on. The help from U2 fans around the world was incredible. I'll never be able to thank them enough.
Posted by Sue Fell at 19:06

Email ThisBlogThis!Share to TwitterShare to FacebookShare to Pinterest
Labels: atU2, Matt McGee, U2, U2 - A Diary