A Night of Surprises!

September 20th, my birthday and official retirement day, and I was in my favourite city Dublin. I was there with my three friends Debbi, Dianne and Julie for this celebration and also for a week's holiday.

A lot of subterfuge had been going on since our arrival in Dublin, whisperings behind my back, conversations stopping when I went into the room. My friends had told me that they were treating me to a night out and to dress nicely for the evening, I could even wear high heels as we would only be walking from a taxi to the building. I did not know what they had lined up for me, though I had an idea of where we may be going.

In the evening we all got dressed up to go out and I must say we looked really lovely - we are getting good at this dressing up lark nowadays! I came through to the living room and there were my presents and cards along with an "enthusiastic" rendition of Happy Birthday. I got fantastic presents, a silver necklace with a key on it (the key to a new life), a lovely handbag, a purple stone necklace and a beautiful bracelet which had a charm on it that symbolised nursing. Their cards were special too - and they even had a huge card made from the photo of Bono and me from when we met him last year! What great, thoughtful friends I have.

The taxi drew up outside our accommodation in Dublin and Debbi ran out to tell the driver where to go without me hearing. We piled in and drove into the city centre and headed for the place I thought we might go - The Clarence Hotel. We went in and Debbi got a bit furtive and hung back and told us to go do 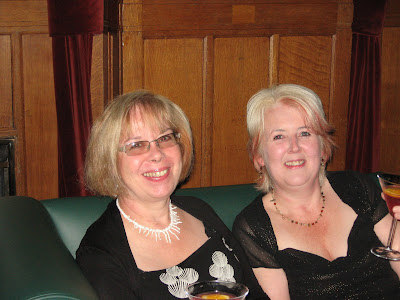 wn the corridor, Dianne, Julie and I moved on and kind of hovered, then Debbi called us back and we were ushered into The Study. On the table there were four Cosmopolitan cocktails and nibbles. That was such a big surprise, only residents are normally allowed to go into that room, so we were really honoured to be able to go in, Debbi had arranged that with a member of staff from the hotel.

The bar manager, a pleasant young man called Jordan, came in to see if everything was ok. He said he'd mixed the drinks himself, we said they were perfect, (as they were) just the way we like them.

We sat in The Study for about an hour chatting and drinking our cocktails which went straight to our heads as we had eaten very little that day! We tottered through to The Tea Room Restaurant at 8pm (not an easy task when you are tipsy, unused to high heels and are walking on slippy wooden floors!) We got there without any undignified stumbles or trips and were seated at the same table we had last year when we dined there when we stayed in the Clarence Penthouse (when got champagne and drinks from Bono!) we all sat in the same seats as well.
We all had the tuna starter which was rather salty but ok. I had the duck for the main course and it was delicious, so tender. After a break we got the menus to order our desserts, I chose mine but the others were taking their time. I asked if everyone was ready to order but they weren't, they seemed a bit distracted, but I said nothing, after all we weren't in a rush. Then the head waiter came across to Debbi and she said something to him quietly. Big mouth me asked, "What did you say to him?" and she said that it was that we'd just like to wait another ten minutes before ordering. I then noticed Debbi and Dianne take out their cameras and realised something was up! 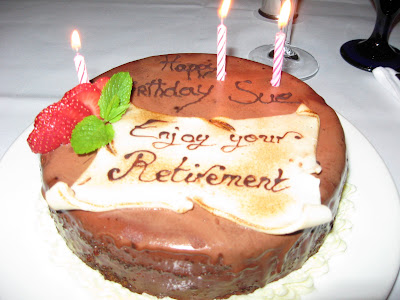 Sure enough shortly afterwards the waiter brought across a gorgeous cake and put it in front of me. It was chocolate and had Happy Birthday Sue and Enjoy Your Retirement written onto a scroll of white chocolate on the top. They kindly only put three candles on it so it wasn't too many to blow out! Also mercifully the girls didn't sing Happy Birthday for a second time either! (Sorry girls!)
The cake was such a work of art it seemed a shame to eat it! But that didn't stop us for long and we were soon tucking into it. It was as delicious to eat as it was beautiful to look at. It was a chocolate mousse on a base of thin pastry. There was an occasional crunchy bit in the mousse and the cream around the base was violet flavoured - all the tastes and textures went together so well!
We couldn't have eaten another thing after the cake, and just sat and relaxed and chatted. It was quite late when we decided to leave (along with the rest of the cake) and as we passed The Study to order a taxi from reception Debbi and I saw Edge in there with some other people. It was only a fleeting glance but we were both pretty sure it was him. There were two large security types hovering at the door so thought that Edge probably was with some VIP in there as I doubt the security would be there for him. Pity he hadn't come in there earlier!
It had been a wonderful evening. I can honestly say that it was the best Birthday I've had, no one has ever gone to such lengths to make it such a special occasion for me before, I loved it and felt so special. I couldn't ask for more wonderful friends and thank you girls for helping me start my retirement in style and for the most brilliant Birthday ever! 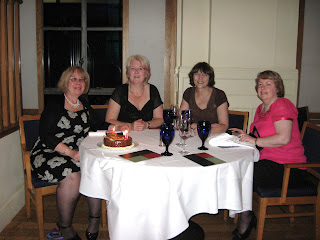 Me, Debbi, Dianne and Julie in The Tea Room Restaurant at the Clarence Hotel in Dublin