A few months ago my friend Debbi and I were pining for Dublin, I saw really cheap flights advertised on Ryanair and, as we live a short flight away in the UK, we decided to have a day trip over there. I decided on June 10th because that's the date that jumped out at me when I was looking at the calender.

It was so nice to be back in Dublin, though each time I go back there there are so many changes. But I still love the city and it's people.

First of all we went to Sandymount Green, which we love and was how we remembered it, peaceful and relaxing. We found a great little place called Cafe Java where we had a delicious breakfast. It was a gloriously warm and sunny day so we sat in the Green for a while after the meal watching a group of toddlers having great fun playing.

We then caught a taxi to Hanover Quay, and yes, since we'd been there another building had grown from the dust of the old. But the studio was the same, in fact it's the only thing that hasn't changed along the quay. We tried to get a drink at one of the swanky restaurants there but we could not just have a drink, we'd have to have a meal as well. So we went to the Spar and bought drinks and sat at the tables outside for a while.

We saw all the band arrive, Bono honking his horn as he did, but none of the band came out. Rumours are that they are in their last week of recording and very busy so that's probably why they didn't do the meet and greet most of them do regularly. On talking to another fan there she told me that the previous evening she'd met some of the band and that they were really nice but Bono had been very tired.

I never feel the band should come out to meet the fans. To me they should give us good albums and live shows, anything else is a bonus. And I can't complain, I've had two lovely meetings with Bono and Adam last year, so I was not disappointed about no meetings this time. We did get to see Brian Eno who came out to go to the Spar (that shop must be a hot place to see a famous face nowadays). He smiled openly said hello when he came out and when he came back he said,

"Nice day", to us which amused me as it was so British to talk about the weather! There's always something about Brian that reminds me of Adam Clayton and I felt that again then.

During our waiting time I heard a few minutes of Bono singing. It was not loud and often drowned out by the building work and traffic but what I heard was wonderful. It was very melodic and Bono's voice soared - I now know what Eno meant when he was quoted as saying that Bono is singing like a bird. I couldn't hear any accompanying music, just that wonderful voice and I kind of melted inside as I listened, it was just so beautiful!

Ever since we arrived in Dublin, at Sandymount and at Hanover Quay the sun had been shining and it was really warm and we had been out in it. Debbi and I realised we should have had sunscreen on - something not often needed in Ireland! Both of us are very fair skinned and burn easily so we left our jackets on to protect ourselves a bit, but at times it 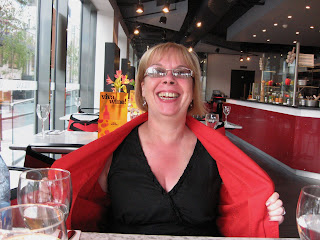 got very hot and we were grateful for the odd cloud that floated along.

We didn't stay long after the band arrived, as we wanted to have a meal somewhere before we set off for the airport. We ended up in Milano one of the new, ultra-modern restaurants on Hanover Quay. We had a delicious Italian meal there that, surprisingly, wasn't too pricey. I can remember when there was nothing at HQ, no shops, no restaurants, no toilets, all there was were businesses. Now with the shop and restaurants things are a lot easier for the U2 fans!

It was while in there we realised we had really caught the sun, especially on our noses and cleavages! That's me flashing my burnt cleavage in Milano in the photo.

This was a flying visit but it actually felt longer than the twelve hours we were there, and it will keep me going until our next proper holiday in Dublin in September.
Posted by Sue Fell at 12:28