Songs of Innocence - My Thoughts

Well I've finally made myself sit down and write about U2's latest album, just six months after it's release lol! Not sure why I haven't written properly about it until now - it's certainly not because I don't like it. I'm not going to do a song by song review, there's no point now and I will not be writing a deep analysis either. I'm just going to write about what the album means to me.

Firstly, Songs of Innocence was a long time coming, over five years, which, even for the slow working U2, was a record. I must admit, though I've been a fan for over thirty years I didn't hold out much hope for this album. The band's last few albums, though good, were nothing outstanding, nothing that excited or surprised me and I honestly thought, that's it, they're in their 50's now and they have had an amazing career but they have lost that spark, that creativity. I hated to admit it to myself, but after all these years of being a fan, I was drifting away and not over-excited at the thought of a new album, I needed a U2 injection, a boost to bring me back to the fold. 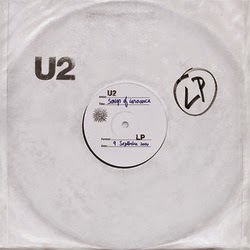 The first surprise was the way it was released, we knew that we would see an album soon, but there it was, at the launch of the iPhone 6, free in your Cloud waiting to be downloaded, Songs of Innocence! Of course there were a lot of people who were "outraged" at this intrusion of their phones, But people didn't have to download it did they? I got a new HTC not that long ago and in my music there were various songs I didn't put there, I just deleted them, no big deal. But of course, the U2/Bono haters had to jump up and down about it.

Now I'm not into the corporate side of U2 that's developed over the last fifteen or so years, in fact I really dislike that side of them. I admired them when they were not into all that.  But, like it or not U2 is a business as well as a great band, that's the reality and this PR stunt really got them and Songs of Innocence into the headlines, something they probably needed as they had been absent from the scene for so long. I think in some ways it may have backfired a little as many people were talking more about the so-called phone intrusion rather than the actual music on the album. But that aside U2 were back in the spotlight.

So this surprise release got me all excited, and, once I'd figured out how to download it, I listened to it. And I listened again. For me it wasn't instantly an amazing album, but, for the first time in many years, here was a U2 album where the music surprised and excited me, it was not safe or predictable, it was, different, very different and had me both questioning and feeling a buzz inside which is always a good sign!

I quickly realised this was the album I'd wanted U2 to make for a very long time, it's an album about their own roots and influences in Ireland. They've explored other influences in their career but never the things that from their early pre-fame days formed them in who they are as people and a band. I've always felt that, besides their talent, two things make U2 special, the fact that they the best of friends and that they are Irish (or in the case of Adam and Edge grew up in Ireland) being Irish is a big part of what makes this band great. So for me it was only natural that they would one day explore that in their music.

The albums looks at both musical influences The Miracle of Joey Ramone (The Ramones) and This is Where You Can Reach Me Now (The Clash)  and more personal songs such as Iris about Bono's mother who died when he was 14, and Cedarwood Road, the street where Bono grew up, and the beautiful, melodic Song for Someone about Bono's childhood sweetheart Ali who he is still married to now. Iris especially is heart-breakingly personal and incredibly moving. I have always admired artists are able to open their heart and soul to the audience like this.

The lyrics (credited to both Bono and Edge) are some of the most honest and soul-baring I've seen from U2 and are some of the best written for many years. I've always been a fan for whom the lyrics are as important as the music and over the last few releases I felt that the lyrics were often lacking, but with this album they are up to the best U2 standard once more.

As a fan of 32 years, I feel Songs of Innocence is very much an album for longtime fans like myself. We are of a similar age, and really understand where the songs are coming from, many of us have lived through similar experiences. And we used to buy our U2 albums as 12 inch LPs, (as per SOI cover) no Internet or downloads then! There is a tour starting in a couple of months and these songs will change and develop as always on tour, so looking forward to hearing them live.

Finally, there is a rumoured follow-up album called Songs of Experience which will be a look at their experiences later in their career. To me, and many others, it feels like these two albums are a lead up to the end of U2. It's telling their story in music, and, to me, it would be a good way to say goodbye. The band are in their mid-50's now and you have to be realistic about how much longer they can go on. They will have been together for 40 years next year, and still producing good music, what an achievement - and it also would be a good time to bow out. But who knows!

Is Songs of Innocence a great U2 album on a par with The Joshua Tree and Achtung Baby? I don't think so, but it is a great creative, honest piece of music from a band that still has something to say. It is also the album that brought me back into the U2 fold, even now U2 can still surprise me!
Posted by Sue Fell at 15:30