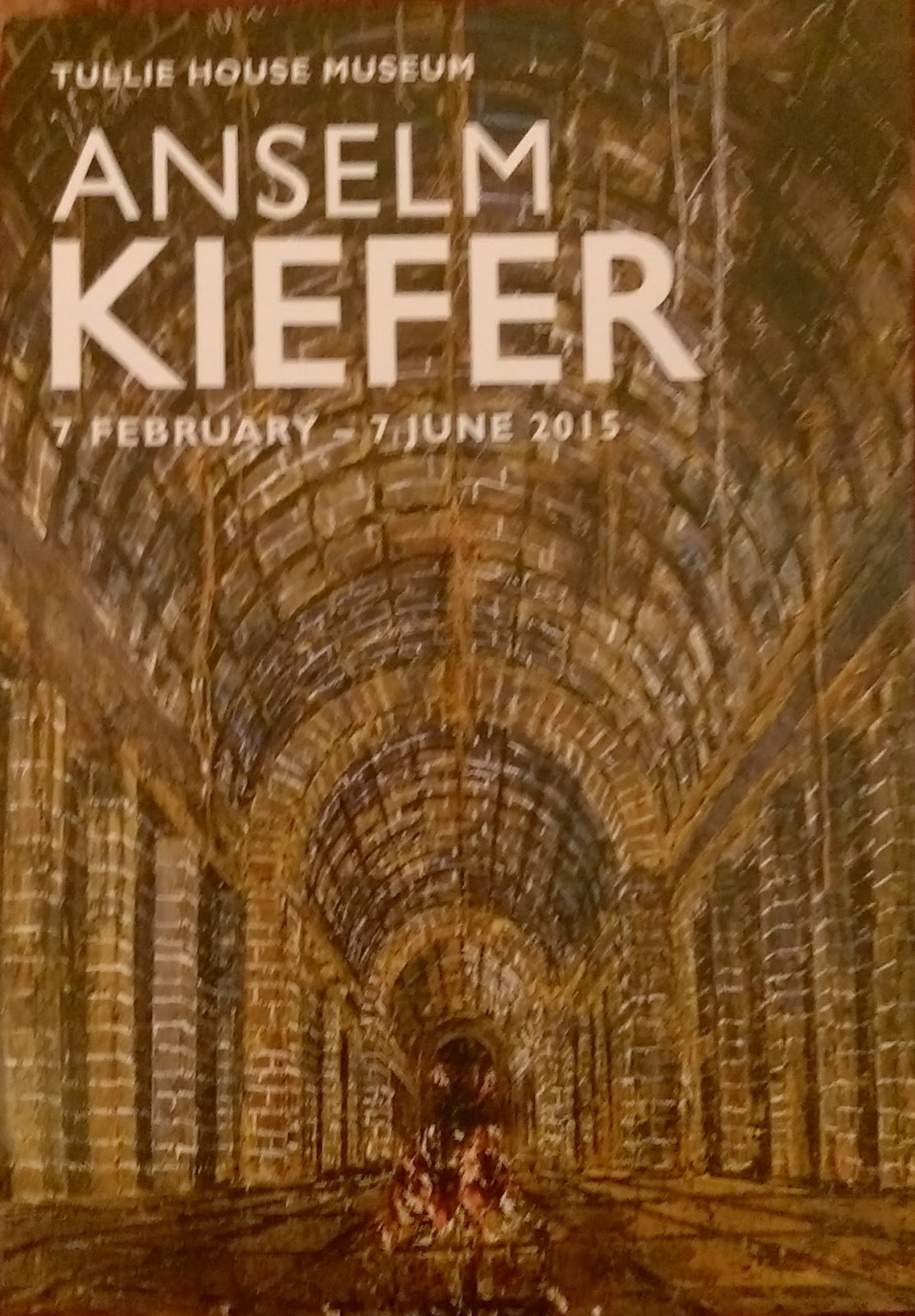 My Cousin Glen and I recently went to see this exhibition at Tullie House. The exhibition is presented by Artist Rooms, a collection jointly owned by the Tate and National Galleries of Scotland. I must be honest and say that I had never heard of Anselm Kiefer before but I am always ready to look at art that is new to me. This exhibition covers the period of the artist's career from 1969 to 2014.

Anselm was born in Germany in 1945 and now lives and works in France. He is considered one of the greatest European post-war  artists. He cites artists such as Vincent van Gogh and Caspar David Friedrich as influences and I can see some of the drama of Friedrich (who is a favourite of mine too) in his work but I can't see the van Gogh influence, except that there were some steel/iron sunflowers in one of his works. The first thing I noted about his art is that it tends to be either monochrome or earthy colours. He works in many mediums, paint, photography, metal, sculpture, collage, often using grit and sand to give the work texture, the earthy colours fit well with such media. He is fascinated by history, philosophy, mythology, science and the Third Reich and these subjects appear in his arts time and time again. There were a lot of exhibits on show but I will just write about three that interested me most.

The most striking painting for me was the one featured on the museum's exhibition information leaflet, (above) it was especially created for the exhibition and is called Urd, Verdando, Skuld (The Norns 1983.) The norns are "Fates" of Norse mythology representing Past, Present and Future, their names are written in chalk on the ceiling of the building. Hanging from the ceiling of the Third Reich-like building are the strings of destiny. All these subjects are ones that Kiefer frequently returns to. I looked at the pictures before reading the information about them and to me it looked like these strings were roots reaching down into a dark, murky vault of time, of history. Kiefer is of a generation of Germans that grew up after World War Two, and had to come to terms with and deal with the guilt of what had happened in their country shortly before they were born. He was not afraid to confront this history in his art, which also includes some self portraits of him doing the Nazi salute.  I am half German, born a few years after Kiefer and as I was growing up I was very aware of that feeling of oppressive history and guilt. I wasn't proud of my German background for a long time and even hid it, Now that has changed and I can embrace my heritage, because no country, no history, is totally negative and Germans have a lot to be proud of too. I think my own personal background made me see those things in that picture and I found it stirred a lot of emotion in me. It is a very hypnotic painting, it draws you in and looks much more impressive in real life than in the image in this post.

Another picture that I liked was Hortus Philosphorum (2010.) Keifer made piles of books from lead and photographed them. Over the books lay lead sunflowers, twigs and other items, Kiefer described lead as the "only material heavy enough to carry the weight of human history."  It was like the lead items were holding down the books, the knowledge trying smother them, but knowledge never dies. A very thought -provoking piece of work.

The next piece I liked was Untitled 1988. There were six small gold leaf covered items, and, being an ex-nurse, it soon dawned on me that they parts of the human body. These were casts of real body parts which included a kidney, inner ear and heart.  In the middle of them was a piece of seaweed that seemed to me like splayed out blood. Again, it made us think, these were such important parts of the body, of life, yet they were quite small.

I must admit I wasn't very impressed when I first went into the exhibition, it looked dull and strange. But as Glen and I  looked at the works we had many discussions about them, and they seemed to come to life. They captured our imagination, they made us think, made us talk and really, isn't that what good art should do?

The Anselm Kiefer Exhibition is at Tullie House, Carlisle until 7th June 2015, entry £3.00.