My cousin Janet and I went on a day trip to Edinburgh last week, it had been a few years since I had been there so I was really looking forward going back to this gorgeous city. The coach dropped us off at Waterloo Place just off Princes Street, even though the weather forecast had been poor, when we stepped off the bus Edinburgh greeted us with lovely sunshine. It was noon and we were both hungry so we looked for somewhere to eat, we saw an Italian restaurant nearby called Martone and seeing prices were reasonable we went in. I chose a Margarita Pizza with ham and mushrooms and Janet had Pappardelle Nonna (pasta with beef in white wine/tomato sauce.) Both were absolutely delicious (I tried a bit of Janet's) and went down very well. For dessert we both had ice cream which was deliciously creamy, real Italian ice cream, yum! I will do a separate full review of the restaurant soon.


Suitably reinvigorated, we walked over the North Bridge and onto the Royal Mile where the Edinburgh Festival Fringe was in full swing. I used to go up for the Festival when I was much younger, mainly to see plays and special exhibitions, but I've not been to it for a very long time. The lively, eclectic vibe took me back and I loved it and wondered why I hadn't been back for so many years. There were little stages with varied performances on them, my favourite was a small group of Korean dancers (sorry can't remember their name) who also sang and played a bodhran-type drum. There were First Nation performers, theatre schools, traditional music, people dressed in every costume you can imagine, cards advertising shows were thrust into your hand at almost every step only to end up in the skips that lined the Royal Mile. Most were not doable for us due to time constraints, though one, An improv comedy act called Men With Coconuts fitted our needs, venue close by, free and fitted in with our timescale, so we decided to go to see them later in the afternoon. 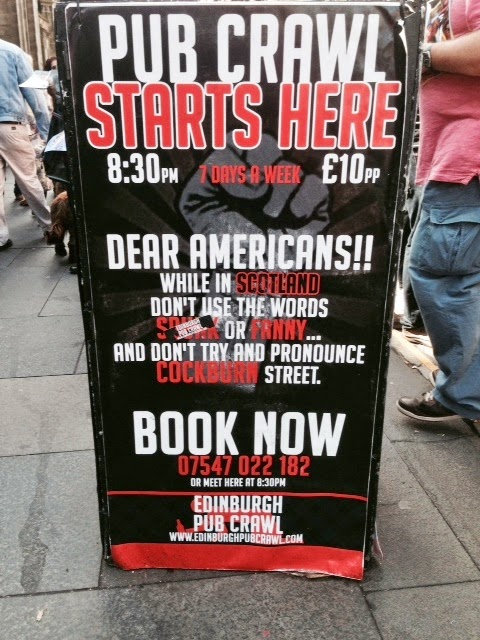 We decided to go into St Giles Cathedral, neither of us had been inside before. St Giles was founded in the 1120's and the saint was a French hermit who is the patron saint of the city as well as the church. It was a beautiful place inside with lots of places where you could sit and just relax and contemplate. It was peaceful and cool, the opposite of the Festival buzz outside. Someone was playing jazz on a piano in there. Unfortunately I hate jazz and it did little for me and I was glad when he stopped playing!

We went outside and pottered round a little (highly priced) market in the square outside of the cathedral. I noticed a champagne bar in the square and reminded myself that I must sample their fayre one day!

We wandered back down the Royal Mile and could see the North Sea, sparkling blue in the sunshine, at the end of it. We turned down Cockburn Street (see the poster above which really amused me, we truly are sometimes divided by the same language.) heading towards Market Street. We passed lots of steep, stepped closes heading down from the rock the castle and the Royal Mile stand upon, very atmospheric, I just love Edinburgh's Old Town.

We ended up at ground level and found the Sportsters Bar and sat in one of the cubicles there. It initially wasn't very busy but it still took 15 minutes for them to produce two cups of coffee, not impressed! We'd been in the bar for a short while and the heavens opened outside, good timing. The bar got busier as time went by and eventually the City Nightclub at the back of the building was opened for the punters. We sat three rows back in the small theatre area, relatively safe for a comedy show lol.

We enjoyed the performance which consisted of a few sketches which all involved audience participation (at a comfortable level) to some degree. I especially liked the sketch where one of the performers had to guess suggestions from the audience for an actor, Angela Lansbury, a film, Sharknado, and a prop, a broomstick from clues given by the other members of the group, very funny and amazing that he eventually got all the answers. The performers, Men With Coconuts, are professionals who are funny, quick witted and smart and I thoroughly enjoyed the show.

We went outside and once more it was sunny and dry, we had timed it really well with the weather. We had just under an hour before we had to get the coach home so we took a shortcut through Waverley Station and went back to Mantone's for a drink and snack as it was close to where we were being picked up. We had delicious toasties and gorgeous strawberry daiquiris (strange combination but it worked!)

I would have liked longer in Edinburgh and vowed to go again soon and maybe stay a day or two so I can really explore and see all I would like to see. Edinburgh is a truly unique city where the old and new live side by side, vibrant and exciting there's no where else quite like it.