Danielle and I went into the city and did some shopping. Then we went to the Reykjavik 791 +- 2 Settlement Exhibition situated in the heart of the oldest part of the city.  It is a small exhibit built around a Viking longhouse that was discovered a few years ago when the area was being cleared to build a hotel. The longhouse is in the centre of a circular room and there are other exhibits  and information on the surrounding walls.  I found the Cultural Affinity exhibit especially interesting, which showed very strong links to the Celtic heritage of the British Isles, whilst male Icelanders have 80% Nordic ancestry, Icelandic women have 62% 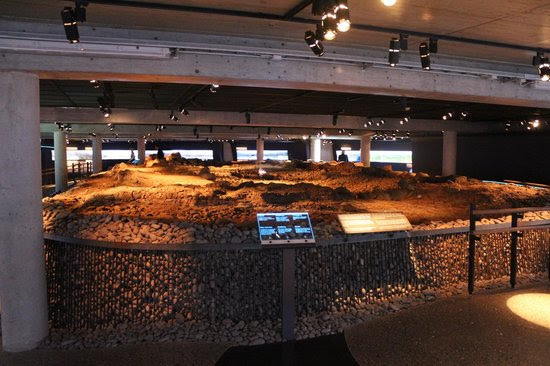 Celtic heritage. An explanation could be that after the Norse Vikings sacked northern areas of Britain they married local women and later moved on to Iceland. There are two types of mitochondrial DNA unique to Icelanders and Hebridean women, so it seems many of the females came from those British islands. Looking at maps that is not surprising as the Hebrides are nearer Iceland that the rest of the UK or Scandinavia. Something I had also noticed in Iceland is that the people are not your typical northern lands blond, a lot of them have dark hair so the heritage is an explanation of that too.

There was an equally interesting look at the settlement of Reykjavik and restoration of the longhouse as it would have been. There was a small but good shop there too and we ended up spending a lot longer in the exhibition than we thought we would, it was a great little place.

We went home and had a snack before heading out for the Þrettándinn, our Twelfth Night, celebrations. It is considered to be a supernatural night in Iceland, when strange things can happen. you could bump into an elf, especially at crossroads, cows are said to talk and seals take on human form. It is also the day the last of the Yule Lads, Kertasnikir (the candle stealer, they all have amazing names lol) goes back into the mountains to join the other twelve lads. The Icelanders celebrate this with parades, bonfires and fireworks.

We had been told the best place to go for this was Aegisida in the west of Reykjavik. We took a taxi there and arrived a bit early, few people were there and the marshals were just arriving. We got talking to one lady who told us that they ask locally for volunteers to marshal the event and she decided to do it.  She also told us that they call bonfires "brenna" which means to burn, so we learned another Icelandic word! We asked if people would be dressed as elves as we'd heard, she said that she thought this didn't happen anymore in Reykjavik, but in the country areas and places like Keflavik they still continued that tradition. Like all the Icelanders we'd met she was very friendly and spoke excellent English.

At half past six the parade arrived carrying torches an
d the torches were used to set the huge bonfire alight. I don't know what they put on it but it caught alight very quickly and suddenly the cold was gone, the heat was amazing.  there had been Christmas trees on the bonfire and people kept coming along with more, a good way to dispose of your trees! Like in the UK January 6th is supposed to be when Christmas decorations and lights are taken down. the lady we talked to said many people keep them up in Iceland now and we found that to be true.

At around seven the fireworks started and it was a wonderful display, the Icelanders love their fireworks! Once the display was over everyone started to leave.  We walked down to a petrol station and asked if they would call a taxi for us which they did.  Danielle saw a chocolate bar called Duett - the same name as her dog and just had to buy it! It was weird because her cat is called Brenna the same as the Icelandic word for the bonfire.

We got the taxi straight to the restaurant we had chosen to eat that night, the Buddha Restaurant. Unfortunately we did not see any elves at crossroads.on the journey. The Buddha Restaurant serves Asian food and we all went for Chinese. I had the Wok Fried Beef in Buddha Sauce (the sauce was fruity) and it was delicious, the others all enjoyed their choices too, we didn't leave a scrap. The young man who served us was lovely, he told us that the premises used to be a bank and there was still a safe downstairs near the toilets which we saw when we went down there. The price of the meal was also reasonable by Reykjavik standards, the restaurant had a lovely ambiance and we could watch life pass by on Laugavegur outside.  I will do a full review of this restaurant separately from this post.

Afterwards we walked the short brightly lit distance to our apartment, Hallgrimskirkja looking glorious all lit up at the top of the street. I remember thinking just how I loved Reykjavik with all its lights at this time of year. The dark January days are anything but dismal there, it is bright and lively, it is something we should do more of here in the UK in the dark winter times.