We were up at 03:30, grunted at each other, skipped breakfast and then caught a taxi to the airport for our flight to Manchester at 06:30.  We had to fly to Reykjavik via Manchester as there were no flights there from Dublin.  The weather was awful, very cold and windy and it was disconcerting to sit in the plane on the runway feeling it getting buffeted by the wind!  But we soon flew up out of the bad weather heading for the land of ice and fire - Iceland.

If was dusk at 15:30 when we landed in Keflavik, and we soon got our Flybus tickets and were on the road for the 45 km journey through the lava fields to Reykjavik.  The dusk was still there when we arrived, twilight lasts a long time at this time of year in Iceland.

We were dropped off beside Hallgrímskirkja which looked stunning silhouetted against the deep blue dusk sky. We walked the short distance to our apartment in The Red House on Skolavordustigur.  The street was all lit up with Christmas lights as were the houses, it looked wonderful, Icelanders love their lights and candles at any time but at Christmas they have them everywhere.

The apartment was lovely, large, airy, very Nordic with lots of decor from IKEA :) The owner had left some lights on so it was very welcoming and we immediately felt at home.  The first thing we did was to go to the nearby supermarket to get some basic supplies in. We'd bought wine at Manchester Airport though as we knew how expensive alcohol was in Iceland!

After this we went out for a meal as it was Dan's birthday. I suggested we go to the Italia restaurant on nearby Laugavegur as I'd been there before and found it to be very good and reasonably priced. It turned out to be a good choice, everyone thoroughly enjoyed their meals.  I'm going to do a separate full review of the restaurant soon.

I woke up and it was still dark, checked my watch, it was 10:00! It doesn't really get light until around 11:00 this time of year in Iceland, yet darkness falls a similar time to here in the UK in the afternoon, I didn't expect that. Also they have a very long dusk.

We walked down to the ocean front and took photos with the beautiful Mount Esja in the background, it looked especially beautiful covered in snow. It was a cold and very windy day and we didn't linger too long, we took refuge from the elements in the nearby Harpa concert and conference centre, an amazing building made of glass panes. One night we were returning to our apartment and there were blue lights rippling over the glass so it looked like waves, a very beautiful effect.

We pottered around the shop for a while, you could taste some of the sweets on sale and fell in love with some cocoa coated chocolate with liquorice centres.  They were very expensive, but hey, we were on holiday so we got a jar each. Now I'm home I'm rationing them to one a day lol!

We went into the city centre and bought tickets for the South Shore Tour before heading Volcano House. We'd forgotten to bring a map and though the centre of Reykjavik is very small we couldn't find it. After asking three people we eventually found it and again were relieved to get out of that icy wind.

Volcano House is four things in one, a geology exhibition, cinema, shop and cafe. We were ready for something to eat so we tried the cafe out first.  It was a cosy place with comfy chairs and there was even a man playing a piano, very relaxing.

We had the Icelandic lamb soup, feeding and warming, just what we needed. We also had Icelandic sandwiches of Smoked lamb, smoked salmon and lamb pate. Brave Dan ordered some fermented shark, which came in a tiny portion 1cm cubes accompanied by a tot of Icelandic Schnapps.  I had a smell of the shark and it was like ammonia, not as awful as I expected. There was so little I didn't try it (that was my excuse anyway lol!) and those who did try it said it wasn't as bad as they expected. We got a mini Lava Bar with our coffees, that started an obsession with them during our stay, they were so lovely we bought a boxful lol!

We then pottered around the geology exhibition which gave a lot of information about volcanos etc. You could even buy pieces of lava, I was surprised at how many different types there were. We went into the little cinema and watched two films. The first was about the eruption on Vestmannaeyjar (Westman Islands) in 1973 and the other was about the imfamous Eyjafjallajökull eruption. Both films were informative and had brilliant footage.

We spent about three hours in Volcano House in all, a brilliant place to relax and also get a bit of education. I'd recommend it to any visitor to Reykjavik.

We went home for a while and got all our layers of clothes on ready for our Northern Lights trip.  The bus picked us up and we headed south to where the sky would be clear.  Our destination turned out to be a restaurant, lit only by candles, this was our base.  I was pleasantly surprised as last time we ended up in the middle of nowhere, here we had toilets, drinks and food!  We decided to avail ourselves of the facilities and had a drink and an Icelandic pastry much like a doughnut called kleina, delicious!

Outside it was cold and very windy, there were quite a few people there but not as many as on our last northern lights trip which was good, it was quieter.  The sky was crystal clear, perfect conditions, but the Aurora was stayed away, there was not a flicker.  At midnight we headed back to Reykjavik, it was disappointing, not seeing the lights, but you can't make nature play game and I know one day I'll see a full blown display!

The other three went on The Golden Circle tour today, I stayed home for a lazy day as I had already been on that trip on a previous visit. I got up late and after breakfast walked the short distance to the beautiful Sun Voyager sculpture on Saebraut.  In the 1980s there was a competition for a sculpture to commemorate Reykjavik's 200th anniversary, Jón Gunnar Árnason's design won. It was unveiled
on 18th August 1990,  sadly Arnason  never saw his creation in place as he died in 1989.  It is an incredibly stunning sculpture, and on this bright, clear day I could see it at its best

There was no icy wind so I walked along Saebraut towards the city. I enjoyed wandering around and ended up at Tjornin, a small lake in the city centre. Lots of people were feeding the birds, there were lots of very noisy whooper swans making their presence known. Most of the lake was iced over and people were skating on it or using it as a short cut.  The sun was setting it was lovely, how wonderful to have something like this so close to a city centre.  I sat on a seat admiring the beautiful sunset that bathed everything in that milky white wintery hue. Eventually, I started to get a bit cold so I headed home.

I had dinner ready for the others when they arrived home, they had thoroughly enjoyed the tour, I''d lit the numerous candles in the apartment and along with the fairylights the place looked lovely. What we thought was quiche (we couldn't read the label) turned out to be a kind of potato flan with vegetables, but it was very good.  The rest of that evening we just stayed in and drank wine, chilled and chatted. 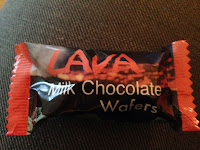