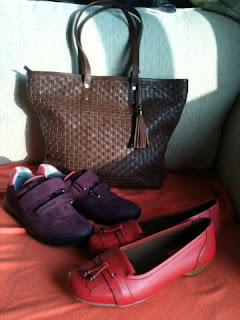 Had a busy day today! I met up with friend Christine and we went out for a late lunch. We then drove a short distance to Gretna Gateway outlet "Just to look in M & S." There wasn't much there and the other shops somehow drew us in, especially shoe/handbag ones LOL!  I ended up buying two pairs of shoes, and, the bargain of the year, a lovely leather handbag for £10, I was well chuffed.

We eventually got round to doing the original purpose of the trip out, genealogical research. We were going to look round graveyards which are a haven of information for family research. Our first stop was in Langholm, where drove up a steep, narrow road through woods full of bluebells to the graveyard. You may think me strange, but I like graveyards, they are peaceful and this one was in such a beautiful setting, high on a hill, surrounded by mountains, and it was a beautiful day (we've had over two weeks of glorious sunny and warm weather.)  There were two areas, the older graveyard was surrounded by stone walls, this was the one we were interested in. Both Christine and I have ancestors from Langholm and though we saw the same surnames we didn't find any of our people. 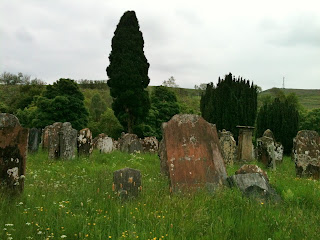 Christine said she knew of a very old cemetery in the countryside just outside of the west side of  Langholm. So we drove there. It was indeed very, very old. There was a rusty iron gate that was difficult to open, and once we were in we were greeted by a totally overgrown graveyard full of stones and memorials, many leaning at precarious angles. The ground underfoot was uneven with knee high grass, we had to be very careful not to fall.  It was very peaceful there, the only sounds being birdsong, the river nearby and the occasional car passing by on the road.  I got photos of a couple of stones that probably were from my family of Dalgliesh, though not direct ancestors. As we walked back towards the car I heard a cuckoo calling, long time since I've heard one of those. 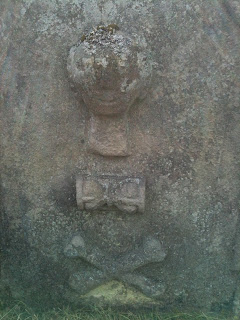 Next stop was the little church and cemetery of Ewes, a tiny hamlet a few miles out of Langholm on the A7 heading towards Hawick. I knew some of my relatives lived in that area in the 1700's but there were no gravestones that gave me any further family information there. Again it was such a beautiful location for a graveyard.  I noticed the symbols on the back of one stone (photo right) which were a bit weird!

We headed back towards Carlisle after Ewes and stopped off at Canonbie churchyard. A lot of Christine's relatives were from this little place. For the size of the place the church (built 1812) was large as was the cemetery. As at Langholm there were two areas of burial and we went to the old one. The whole place was teeming with rabbits hopping about in the sunshine, these places are havens for wildlife. We found a gravestone with lots of information about Christine's family which was brilliant.

By now we were getting tired, we'd trailed around shops and four graveyards for about five hours.  It had been a good day though, we'd got some genealogical info and the weather had been perfect. Plus it's always good to do something different and spend time with your BFF!