The sun shone down onto the crowd at Hampden Park in Glasgow and I was excited to be at a gig once more, Bruce Springsteen's Wrecking Ball Tour had reached Scotland.  It had been around a year or so since my last show and it was lovely feeling that buzz and atmosphere of a live concert.  After a while one of the staff came to our area and asked if any of us wanted to move to the lower tier centre, well she didn't have to ask twice! The seats were directly in front of the stage so we were well chuffed! Maybe some corporate types did not turn up (Hampden is one of those stadiums where the stage is set on one side rather than one end, much better really.)

Bruce and the E Street Band came on-stage with no razzmatazz and launched into We Take Care of Our Own. Very early in the show Bruce went into the audience and collected sign requests, such a great thing for fans. The first request played was Jole Blon which I'd never heard of, apparently it is a traditional Cajun song that Bruce has adapted.

The pace of the show was fast, rockin' and fun, the sign requests, the frequent physical contact with the crowd Bruce had certainly made me and the crowd feel very much part of the show, even in a large stadium like Hampden. The boss certainly knows how to engage with his audience.

The pace slowed up for a tribute to the Big Man, Clarence Clemons, stalwart of the E Street Band, who died exactly two years previously. Bruce made it personal by asking people to remember their own lost loved ones too and as he sang My City of Ruins it was very emotional, the whole crowd sang "Rise up" so loudly that the words must have been heard echoing through many streets of Glasgow. Jake Clemons, Clarence's son, played the sax, it must have been very moving for him to see the reaction of the audience. It was sad, yet also full of love and at the end there was an explosion of applause as everyone rose up, it was one of the most touching, spontaneous and emotional moments I've seen at a concert, amazing.

The next sign request was Dancing in the Dark. One girl had a sign saying she wanted to dance with Jake, she was brought up on stage and danced with him and ended up playing a guitar and singing. When she was back in the crowd a camera caught her expression which was priceless. Another lad asked for a pick, Bruce gave him one, from the look on the lad's face you'd think he'd given him a million pounds lol!

Bruce got a middle-aged woman called Hazel up to dance, then after a conversation with her he also got a young girl up, who I think was the woman's daughter, and he danced with both of them. Hazel gave him a tartan scarf.

Next, a very poignant moment, a sign request was for Tougher Than the Rest, one of my favourites. Bruce had picked out a sign from a girl that bore a photo of a man and asked for this song to be played in memory of Shug, the girls dad, 1951-2013. The lovely thing was that at the end of the song Bruce went back to the crowd, found the girl and gave her back the sign, what a lovely gesture. Certainly a teary-eyed moment.

We all sang along with Waitin' on a Sunny Day as the sun started dipping down in the sky. The party continued, for that's what it was like, a party. The band was very tight musically and Bruce's voice in fantastic form, and they were having a party on-stage too. It's so wonderful to see musicians truly love what they are doing so much. Listening to the songs from throughout the decades it struck me at how many genres have influenced the music, rock, soul, folk, gospel to name a few. 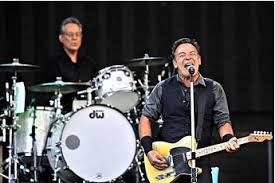 Great to hear more faves of mine Badlands, Born to Run and Rosalita. Towards the end the crowd wanted more and more, Bruce laughed,

He's got energy and stamina that belie those years, I mean, who else does three and a half hour shows? You certainly get your money's worth with Bruce

A rockin' Twist and Shout/La Bamba followed by Shout, a massive hit for Glasgow girl Lulu in the 60's seemed to be the end of the show. The E Street Band left the stage, but Bruce didn't, he got a guitar and played a fantastic acoustic version of Thunder Road. It was stunning, and what a way to end the show. I looked around, usually by this time in a gig a lot of people are leaving to catch the transport or avoid the traffic jams. The aisles were clear, like me, people were transfixed, we knew we were lucky enough to be watching a true music legend.

So, three and a half hours after coming on stage (with no interval) Bruce finished the gig. He showed what a show should be all about, music, the band and the audience, in the right hands you need no more than that.  He may be "sixty-fuckin'-three" but he can show artists much younger than himself how to rock!