The weather was good for our trip down the motorway to Manchester but I felt lousy. I had done a night shift at work on the Friday and for some reason hardly slept on the Saturday night, so Sunday during the trip tiredness caught up with me, so much so that I felt physically sick.  At around 2.30pm we arrived at Glen's son's house (he was at the Download Festival with his girlfriend that weekend) in Swinton where we were staying, I went to bed for a couple of hours and actually slept, anyone who knows me knows that normally I don't take naps but I so needed this one! I felt much better when I got up.

At 6pm we went for am meal at a nearby pub called The Farmer's Arms. It was ok, typical pub fayre, nothing, special but ok.  With the aid of my sat nav Glen drove through the centre of Manchester and on to the Etihad Stadium, I doubt we would have managed it without the sat nav. We parked our car for the extortionate fee of £10 and then walked the short distance to the stadium, it was a cool but pleasant evening, so much better than the monsoon conditions there had been the previous night. Everyone was given wristbands (xylobands) to wear at the turnstiles. 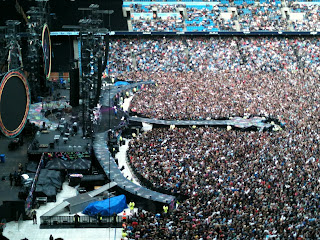 Our seats were in the 2nd last row of the top tier but not far back from the stage, it was a bit windy up there lol! One of the support acts, Robyn, was just finishing her slot. The set consisted of four circular screens at the back of the stage, a curved main stage and a small, x-shaped b stage reached by a catwalk, it was all decorated with vividly coloured graffiti. There was a buzz in the audience, I just love the atmosphere of a live gig.

Coldplay made their grand entrance at 9.15pm. Everyone's xylobands (named after part of the latest album's title Mylo Xyloto) started flashing in unison. There was a sea of red, blue, pink, green, blue and white lights all around the stadium and fireworks whizzed into the air from behind the stage, it was pretty amazing. Later confetti canons spewed hearts and butterflies into the air, some even managed to float up to our level. It must have been amazing to be in the crowd at the front.

The opening song was Hurts Like Heaven, followed by Rush of Blood to the Head. The sound where we were (I know sound can vary so much in a stadium) was not good unfortunately, it seemed to improve as the gig progressed but was never really good.

Chris Martin gave an energetic performance, bouncing about like one of the huge balloons that were fed into the audience at one point.  He talked to the crowd a bit, but I didn't feel he had the charisma that makes a front person in a band really special.

It was good to hear some of my favourite songs such as Yellow, Viva La Vida, Paradise which I really enjoyed. But there was never a time that I got that lump in my throat, felt deep emotions, felt transported by the music. Coldplay are good but they - for me as music is very subjective - haven't the depth about them that I find in bands like U2 and Snow Patrol.

They came on for the encore and for a moment I thought "where the hell are they?" It turned out that they had come one at a time onto small stage right at the back of the field, a nice touch giving those fans furtherest away a close up treat for a couple of songs. The band then ran down the side of the pitch and went back onto the main stage for the final three songs. The first was Clocks and the xylobands flashed into life again. Now that it was completely dark the effect was absolutely stunning, so beautiful, like colourful blanket lying over the whole stadium, gently flashing and undulating in time to the music. It made every person feel a part of the gig as indeed they were.  To see that on such a huge scale (I think the stadium holds 55,000 people) and hear the crowd singing along was awe-inspiring.

The penultimate song was the lovely Fix You, another of my favourite songs by Coldplay. Every Teardrop is a Waterfall, combined with communal singing, sparkly xylobands  and then fireworks brought the gig to an end.

I enjoyed the concert, it didn't move me, but I had fun. Coldplay have been accused of being a bit bland, and  sometimes I can see where that comes from. But it can't be denied that they have also created some wonderful songs over the years too. Would I see them again? I don't think so, but I am glad I went this once - though I am miffed my xyloband remained stubbornly dark lol!