Dapper Rock Stars and the Dog Takes Bono for a Walk

The rock stars scrubbed up well for the GQ Men of the Year Awards in London last night.  U2 won the Band of the Year Award and the photo below (taken from the GQ website) is of them with the award - drummer man AWOL as usual. 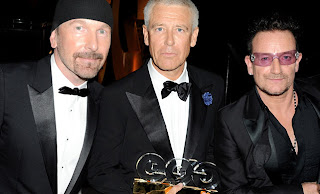 There was a funny interview with Bono at the Awards where he talked about walking the dog in Dublin - or vice versa as it seems!  Spend more time in Dublin Bono, it keeps you grounded.  The follwing extract is taken from the http://www.thesun.co.uk (ignore the usual sarky bits


YOU might imagine a summer holiday for Bono involves sleeping in an oxygen tent at Cannes or counting his collection of hats.
But at the GQ Awards last night the U2 frontman confessed to a far less glamorous activity — walking his new pet dog around Dublin.
I say walking. It was more a case of the chart-topping rock star being dragged around by his pet pooch.
He told me: "I've been in Dublin for the last week or so. I was in France but came home for a while.
"I rang some pals and asked what they thought I should do to keep busy. One said, 'Just walk the dog.' So I took the dog out with my wife. It's a mongrel and a really strong animal.
"It dragged us through the streets and some little kid shouted, 'Is that dog walking you, or are you walking the dog, Bono?'
"I knew I was home. You can't beat it."
The U2 star and bandmates Edge and Adam Clayton were at the GQ bash to receive the Band Of The Year gong at the Royal Opera House in London.
It certainly has been a stellar few years for U2. They earned the most money ever from a rock tour with their epic 360° series of concerts.
Perhaps Bono should stick some of the tour wedge into dog obedience classes.
Posted by Sue Fell at 17:51

Email ThisBlogThis!Share to TwitterShare to FacebookShare to Pinterest
Labels: Bono, GQ Men of the Year Awards 2011, London, U2