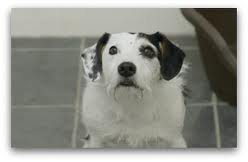 I've just seen the Harvey the Dog ad. Almost everyone in the UK will know what I mean, It's an ad promoting the power of advertising, showing a rescue dog in a kennel trying to impress potential adopters. Very funny, and Harvey just has "something" about him.

I was curious to find out more about Harvey, so in this age of finding answers easily in cyberspace, I Googled "Harvey dog ad" and up popped lots of info. Harvey is actually called Sykes and is seven years old.  He was a rescue dog, as a pup of seven months he followed friends of the current owner and their dog home.  No one claimed him so he went to live in Oxfordshire with Gill Raddings who runs a company called Action Stunt Dogs and Animals. She quickly recognised his good temperament and intelligence, and a legend was in the making!

Sykes was a star pupil and took to training well. He has appeared in many TV programmes - and he has even starred in two films with Johnny Depp, sigh....!

You can read an article all about Sykes (though I think Harvey suits him better) that was in the Daily Mail a while back here.  Below is the advertisement that made him famous.