It's buzzin' at HQ

There have been lots of stories coming from the studios at Hanover Quay in Dublin, U2 are in the studio! They have been there at least two weeks and it's said they will be there until the end of this month. With rumours of an album in October/November it's good to see them at work again.

There seem to be fans there from all over the world and Bono, Edge and Larry have been meeting fans regularly. I think Larry is being elusive as I've not read of any stories of people meeting him!

When I read about fans meeting the band like this it makes me realise how lucky U2 fans are to be able to meet them so easily. No burly security men, if you are willing to wait a while you have a good chance of a meeting, getting an autograph and maybe a photo with one of the band. Not many bands of U2's stature would so open and informal with their fans - and you can't get much bigger than U2 in the music world!

I must admit I've been sorely tempted to go over to Dublin myself as I am on holiday from work the week after next. I checked flights and could get to there and back in one day for £20! Luckily, living in the UK means it's easy to do a day trip to Dublin. I'm someone who much of the time is quite sensible, but I do like a bit of spontaneity and madness sometimes so the thought of nipping over appealed to me. But something I read today helped me decide not to go. A fan's report said there were 20 fans at HQ today and I thought, no I don't want to go when there are a lots of fans there, it sometimes can get a bit chaotic then. So, sensible Sue prevailed over spontaneous Sue this time! I'll content myself with reading other fans' stories (which I always love to hear about) and see their photos through the wonderful medium of the Internet.

Writing of photos this funny photo from Hanover Quay has been doing the rounds on the Net, I'm sure he didn't do it on purpose!!! 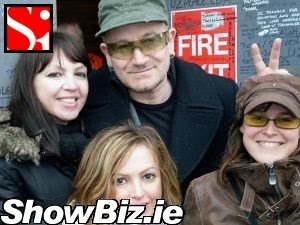