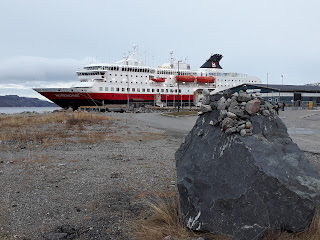 Today we arrived at Kirkenes, 955 miles from Bergen, further east than Istanbul, as far north as northern Alaska and just 10 miles from the Russian border and the point at which our ship would turn around and head on back down the Norwegian coast. Marian and I had been due to go on a husky sledding trip here but it was cancelled due to there being no snow. I was very disappointed as it was one of the main things I was looking forward to on this trip, but you can't control nature. So Marian opted for a hike and I walked into the town from the harbour which wasn't far. The place was bleak and quiet, (it was a Sunday and in Norway everything is closed) and I had to watch how I walked as it was icy. I had my ice grips on but they made me walk really funny and didn't help much, apparently the chain ones are best. It was cold but I found that the dry cold they have there doesn't feel as cold as I expected. I saw a supermarket which had it name in Norwegian and Russian, quite a few Russians live in the town. This area was occupied by the Germans in World War Two and when they left they burned almost all the buildings (something that happened in many of the Norwegian coastal towns.) Apparently it had also been a crossing point for Syrian people entering the country which is strange in such an isolated, northerly place. To be honest on my little walk there wasn't much to see in Kirkenes, but some of the things it is famous for were not happening (sledding, the Snow Hotel) due to no snow. As I got back to the harbour I noticed a rock that had lots of little stones on top of it, so I added one to it, it seemed to be the thing to do.

In the afternoon we had a talk from Natasa about the Vardo witch Trials which was one of the biggest witch trials in Scandinavia and took place in 1621. It resulted in 91 people being burned at the stake. The ship set sail from Kirkenes and in a short time docked in Vardø. There we could disembark and see the place the trials were held and a memorial to those who died. The trial took place at the Vardøhus Fortress which was a five minute walk from the ship. It was dark and the icy wind howled in from the Barents Sea, I was glad to have the torch on my phone to see where I was going. Some people stopped at the fortress and others, including Marian, went on to the memorial, there wasn't time to do both.


The fortress was octagonal in shape and made up of small turf-roofed houses in which there were militaria exhibits. One we were inside the fortress walls there was a bit of shelter from the wind and I wandered through the little houses. In one there was a cannon on a sledge which makes perfect sense for this area. It was a small museum but it was interesting.

Marian said Steilneset Memorial was impressive. It is made up of two parts, a cocoon-like structure mounted on A-frame like structures. You can go inside and in there are lamps by small windows each lamp representing one of the people who was burned at the stake after the witch trials, beside each one is a little information about each person. The other part of the memorial is an eternal flame that burns through a chair and is reflected by mirrors.

It was good to get out of the wild and icy weather and into the welcoming warmth of the Nordnorge. We went to the talk by Bjorn and David which was as entertaining as ever. I learned that during hibernation bears do not urinate, urine produced is converted into amino acids that stop their muscles from wasting away during their long sleep, amazing! We also learned that house prices in this area are cheap but if you go to Tromso or Bergen they are very expensive.

That evening we had reindeer (this being the area where the herds of reindeer range) for our evening meal and it was lovely.  Later the staff put on a tongue-in-cheek fashion show of items from the shop, some of them really got into it and it was fun, the crew are lovely..

Day 8
We sailed past an island called Håja that sat in the sea like a huge whale. Once past this island you see Hammerfest which claims to be the most northerly town in the world. Once docked we disembarked and first went to a pharmacy to buy some (very expensive) cream for my eczema which had flared up. The pharmacist told me that the air is so dry there that you must keep skin well moisturised.

We then popped into a nearby art gallery but it wasn't really our cup of tea. Nearby was The Royal and Ancient Polar Bear Society  which housed a small museum and rather good little shop. The museum depicted the history of Hammerfest, and the hunting and fishing that once made this town a very busy port. It was also full of stuffed animals including an eagle, walrus and polar bear. Some of the old photos were really interesting. Seeing we had time to spare after looking around the museum we walked the short distance to the church. It was built in 1961 (Hammerfest was another Norwegian town that was burned by the Germans when they left) and had a beautiful triangular stained glass window and wooden panels painted by local artists. We both liked Hammerfest, it still felt very Arctic and it had a good feel about it.


We headed back to the Nordnorge and I went out on deck and watched Hammerfest disappear behind Haja once more. The scenery was stunning as we headed south once more towards our next port of call, Tromso.