U2ie Tour London Part Two - Up Close to U2 and a Posh Afternoon Tea.

Today we had general admission tickets, our only standing show and I wasn't sure I'd manage to get through it, as well as having to stand for a long time we both also had nasty colds. We decided not to go early to queue, we're past that nowadays lol, and wandered up to the O2 at about 5:30pm. Again we had to wait ages to get in, about an hour, which was tedious, this venue certainly is a pain regarding the time you have to wait to get into the arena, even when you have a seat. 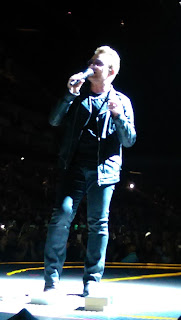 When we got in at around 6:30pm we saw that there were no free places on the rails so decided to stand just behind some small women who were at the barrier of the e-stage. The back of the e-stage close to us was kept free of fans as that's the way Bono would enter the arena, we knew once he was on the stage the security let fans round there and our task was to move quickly when that happened and get on the front barrier. There was a lovely security guard by us and he said he would drop the rope (that kept the fans back) as quickly as he could when he was given the ok by his boss.  At 8:15 the show started and Bono walked right by us, soon the rope dropped and Debbi and I linked arms and dashed to to free area and got right on the barrier. We could hardly believe we had managed it, especially as we hadn't queued for ages to get a good place, I thought the days of seeing a gig so closely were long for gone for me.

And what an amazing experience it was to see the band just a few feet away at times, plus we could see right down the catwalk to the i-stage as well. The only downside is that you cannot see the video screen from there. This show had a more playful feel than the previous night, Bono talked a lot and three times he got fans on stage. Whilst the band were on the e-stage Bono noticed a poster being held up just to my left, he squinted hard and then read it out , turned out two Angel of Harlem with the band, so Bono asked them up on stage. Edge looked worried and said words to the effect that they couldn't have two guitar players on stage as they only had one spare guitar (we were close enough to hear this off-mike.) Bono took absolutely no notice and just said, "Edge gets a bit nervous when this happens." He gave the guitar to one lad and told the other to stand back and "look useful." Meanwhile the crew were in a tizzy trying to find another suitable guitar which they did remarkably quickly. Both brothers played well and it was really good fun and Edge ended up with a big smile on his face. 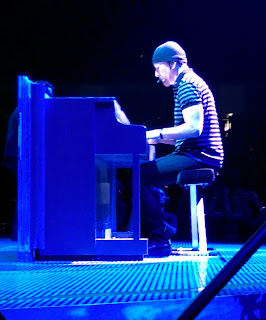 During City of Blinding Lights Bono got a young man up onto the catwalk and at the end of the song gave him his glasses and jacket and then put on the lad's jacket, which was way too small for him. Once he was on the main stage one of the crew had to pull it off him as it was so tight!

As well as Angel, songs new to the setlist included Out of Control, Desire and I Still Haven't Found What I'm Looking For. The latter was the final song and Noel Gallagher joined the band to perform it, seemed to impress the crowd, but I would have preferred U2 to do the the song themselves.

It was wonderful to be so close to the e-stage, there's something about seeing the beads of sweat run down Bono's face lol. But you also see the energy and little nuances and communication between the band members, you feel part of the show as you are so close. The show once more was wonderful, more playful tonight, but I must say I did miss the video wall, it is such a stunning and interactive part of the show that it almost has to be a part of seeing this particular tour.

After the show wandered off home via the Olympian Way, weary, still sniffling  but happy.

I had been full of good intentions to explore Greenwich a bit today which was a free day. But I was so weary and full of cold that I had a very long lie in and just chilled, Debbi did the same. We needed to recover and recoup and give our colds a chance to ease.

That night we did go out to eat, we went to the Greenwich Kitchen near the O2. I fish and chips which was lovely and the fish huge, washed it down with a refreshing Pimms and lemonade. I'll do a full review of this at a later date. 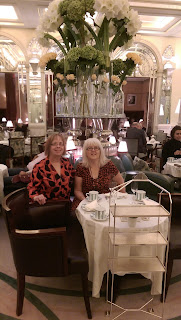 Today we were going into the city centre for afternoon tea at Claridge's. Months ago we tried to book an afternoon tea at The Ritz but it we couldn't get a slot anywhere near the time we wanted. So we went to the next poshest Claridge's. We dosed ourselves up with cold remedies, put on our glad rags and got the Tube to Bond Street which is the closest stop to the hotel. Unfortunately we took a wrong turn and ended up walking down a heaving Oxford Street, we turned back and then found the right street and it was only a couple of minutes from the Tube. We went in through the revolving door, inside was very grand with a huge chandelier. We were greeted immediately, we first went to the ladies, very posh, the woman in there insisted on filling the sink for me! We were a bit early for our afternoon tea in The Foyer but they let us in anyway. The room was beautiful, art deco style with high ceilings and ornate stucco work and the most amazing flower displays I'd ever seen, the server took our photo beside one.

We were given the menu to choose which tea we wanted, there was a choice of 22, we went for their own blend which was delicious. We had chosen the champagne afternoon tea so the first thing we got was a generous glass of that. The sandwiches were fantastic, scones still warm and cakes beautiful, everything was perfect and it was very leisurely. Claridge's was posh, but didn't feel snooty which was nice, it was a wonderful experience. I will write a detailed review separately.
Posted by Sue Fell at 22:38