We were up early and went down for breakfast. It was lovely, a good choice of typical Continental breakfast fayre along with more Swedish things like herrings in a creamy sauce, caviar, crispbread and pickled cucumber. They even had a choice of 3 minute and 6 minute boiled eggs wrapped in linen cloth to keep them warm. A member of staff was constantly checking and keeping everything topped up.

After breakfast we walked through the 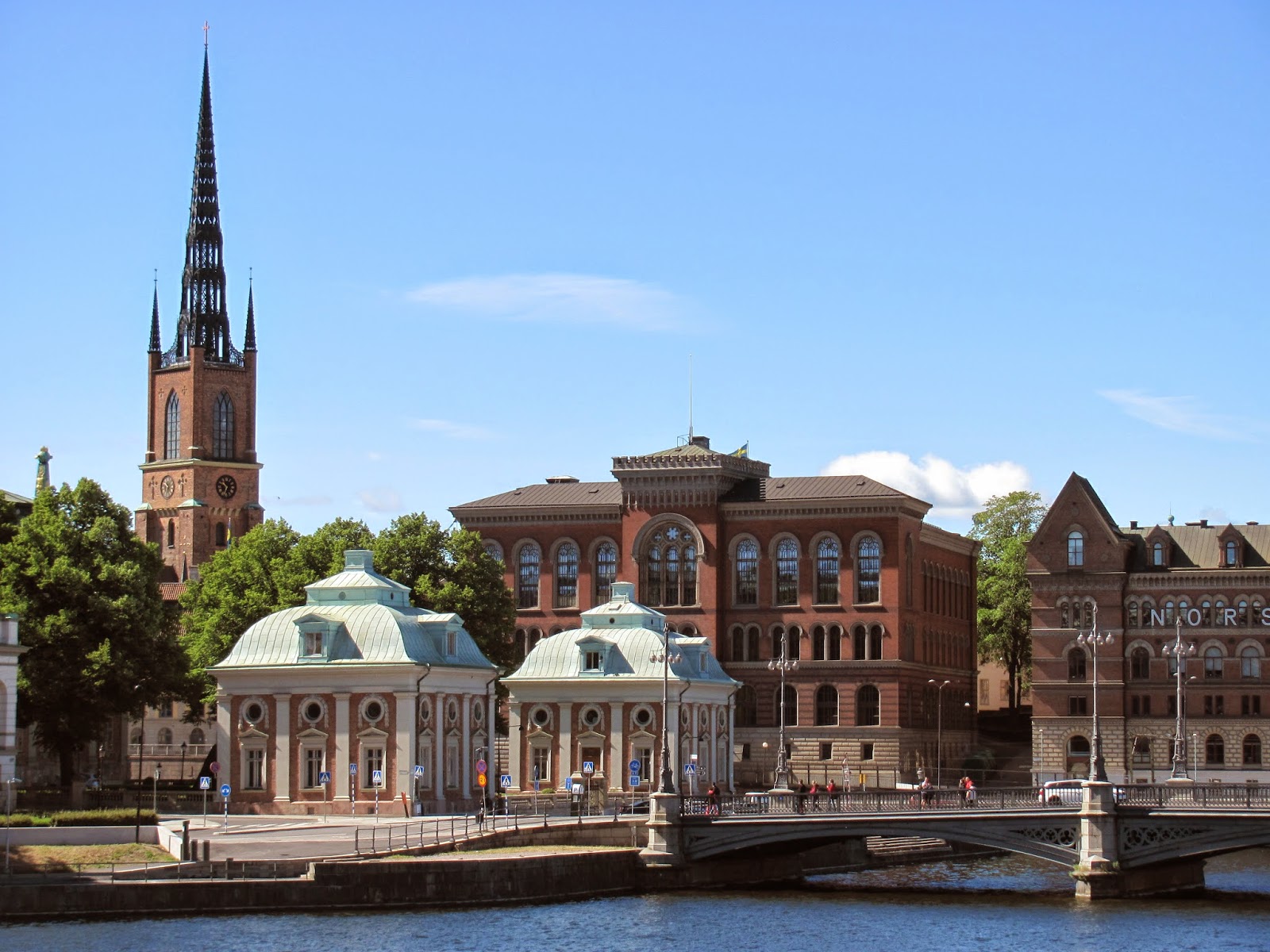 arches of the government buildings and over the bridge. It was a beautiful morning and old Stockholm looked so lovely with its spires and gorgeous historical buildings. We walked on into the modern city centre. 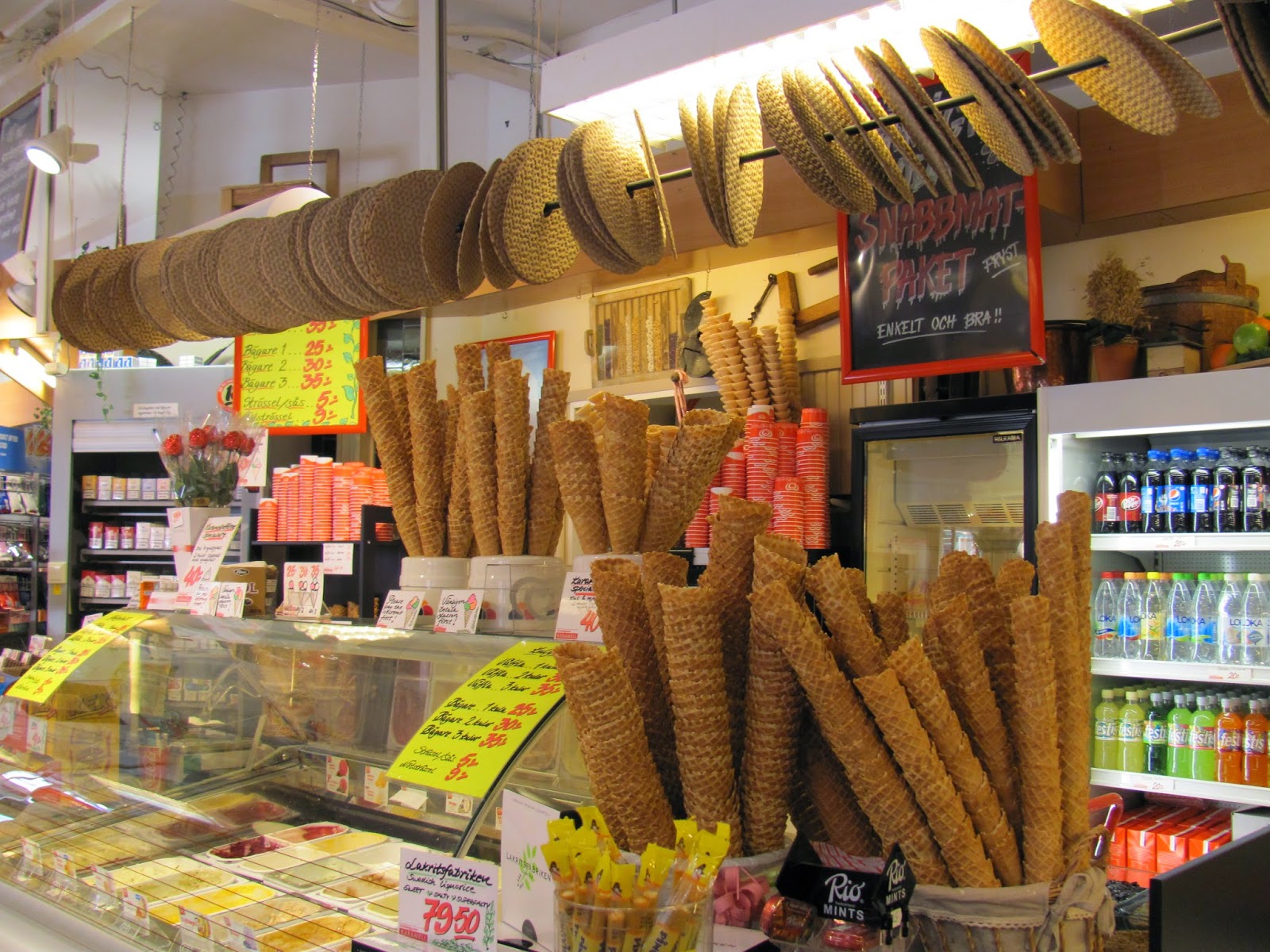 called skumtopp which made us smile, they are marshmallow covered in chocolate and much more delicious than they sound. They also sold Swedish crispbread which was circular with a hole in the middle and dozens hung on a pole above the counter.

We walked on to the Tourist Information to pick up my Stockholm Card that gave discounts on trips and museums. We also booked the Under the Bridges boat tour for the next day.

Then we caught the hop on hop off bus. We had decided to do a circuit first and then get off at places we wanted to see more of. We toured the centre of the city, passed the City Hall its three golden crowns on the tower gleaming in the sunlight.

The Opera House which was beautiful, and, like a lot of the buildings, it had a Germanic look about it. We skirted Gamla Stan with its narrow roads it was impossible for the bus to enter properly.

We passed the huge Royal Palace and saw the changing of the guard. We then crossed a bridge onto the green island of Djurgården   which is Stockholm's leisure place with amusements and parks and also where many of the city's museums are.

On the second circuit we got off the bus at the Vasa Museum which houses the Vasa warship. The building itself was spectacular with the "masts" soaring out of the roof of the building. The Vasa was built in 1627 and sank on its maiden voyage 1300 metres from where it set sail. It lay on the seabed until it was recovered in 1961. It was in an extremely well preserved state and put on public display.

We got our tickets and went in and immediately are in a huge room dominated by the Vasa, it was stunning, so much bigger than I expected. There were galleries at different levels to the side of the ship so you could see all levels. To the other side were exhibits of articles found in the wreck and videos about its history.

The ship had a huge, curving prow and highly decorated stern, the masts were massive. Looking at it I wondered how this huge ship floated at all!

We had a snack in the museum's restaurant before leaving. I had wanted to go to the Nodiska Museum close by but it was closing. I pondered on going to the Abba Museum further down the road which only opened the previous month, but decided against it as it was extremely expensive and we got no discount with our Stockholm Card.


We caught a tram back to the centre of town and then went our separate ways as we wanted to see different things. I headed back to Gamla Stan and crossed a bridge and onto the small island of Riddarholmen. I wanted to see Riddarholm Church, now a museum and burial place of Swedish royalty until the 1950's.  Unfortunately it was closed, so I headed back to our hotel, popping into some shops along the way. There were some beautiful old buildings in Gamla Stan with ornate carvings around many of the doors. Its so good that it has been preserved for us all to enjoy.

Before we headed out too eat that evening we had some wine (that I had brought with me knowing how expensive Sweden is for alcohol!) in the lovely little library area of the hotel. It is on the first floor and looks out over Västerlånggatan. It has a comfy leather suite and books to read, very relaxing.

We walked the short distance to Stora Nygatan to an Italian restaurant called Rodolfino's. By coincidence we had both noticed it on our way back to the hotel earlier, it was a bit away from the main tourist area and was therefore a little cheaper than some we'd seen. It was decorated in the red, white and green of the Italian flag, basic, but comfortable and friendly. More importantly, the food was delicious, we shared some wonderful garlic bread then for mains I had a ham and mushroom pizza and Yvonne had seafood pasta and we both ate the lot.

It was after 11pm when we headed back to 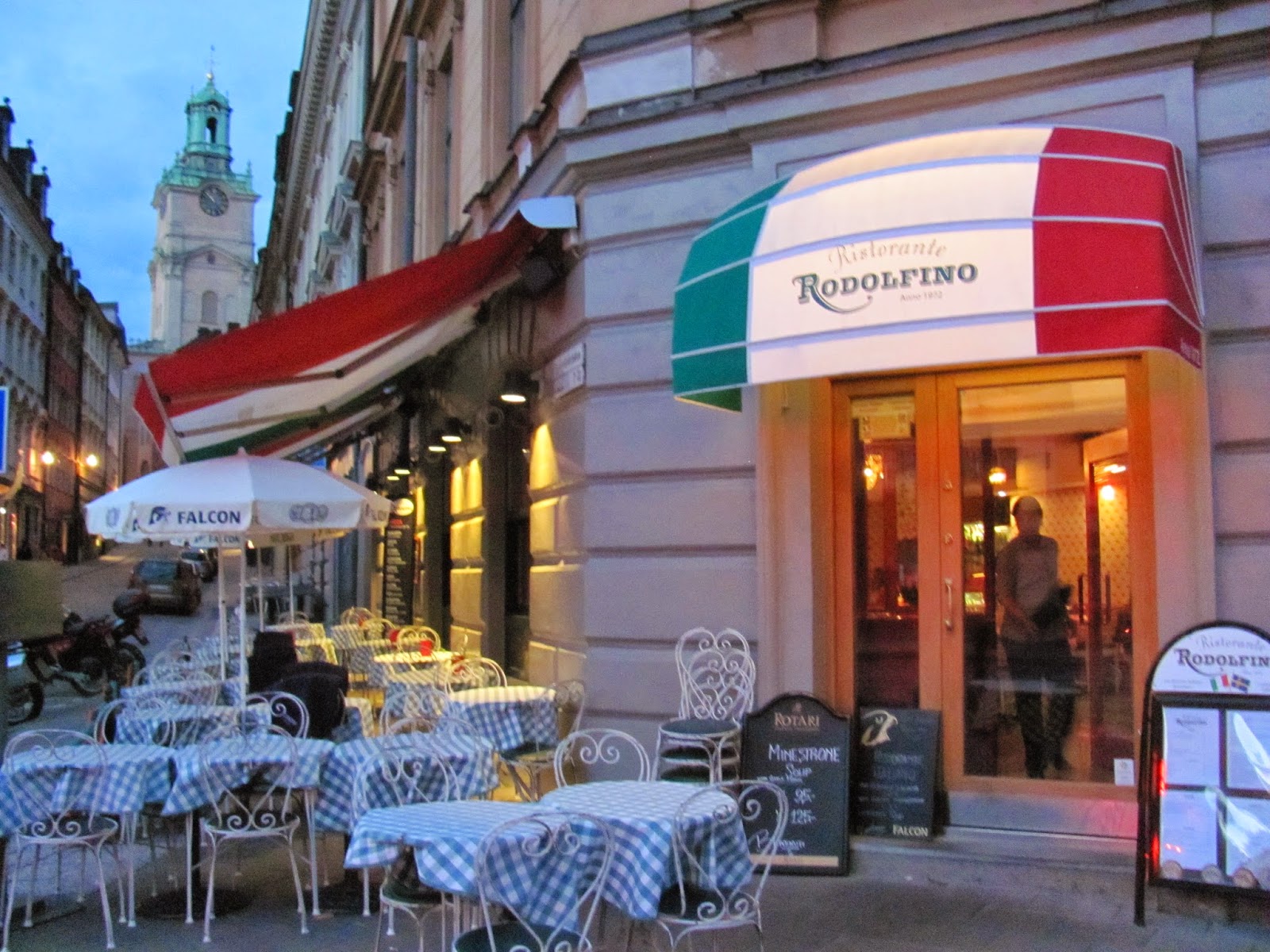 the hotel. It was still light and ahead of us the tower of the cathedral, Storkyrkan, rose above the other buildings and the usually busy main streets were quiet. Already our first full day in Stockholm was over and we were both loving the city.
Posted by Sue Fell at 12:30