It's taken me a while to start my holiday blog, life has been difficult recently, and for a while I could not put fingers to laptop. But now it feels best to keep occupied and remember the fabulous time I had in Dublin, and in time these great memories will over-shadow the sadness of recent days.

Like the Queen, this year I had two 60th birthdays, a real one and an official one.  My real one had come and gone and the official one was set for October 9th, to be celebrated in style in the penthouse suite at the Clarence Hotel in Dublin. This fell in the middle of a week's holiday with friends in the city. Besides a brief weekend visit in June this year, we hadn't been to Dublin since May 2012 and were ready to spend some proper time there.

I met up with my friend  Debbi at Manchester Airport and we had delicious lunch in the Grain Loft there. It's always good to get together, we just pick up where we left off in that easy way close friends can.

The flight was smooth I was sandwiched between Debbi and a rather large man.  I noticed as we were getting up that he had a tee-shirt on that had U2 on it so I asked if he was a fan. He said that his name was Bobby and that he worked for Jay Z who was performing in Dublin on Sunday, on checking the Net it seems he is the Tour Manager. We said we were U2 fans and he said he'd met them a few times and that they were really nice guys, which of course we knew. Then as an after-thought he asked if we'd like tickets to see Jay Z, we said yes (anything for nothing!) and he gave us his email and said for us to contact him.  We did send an email, but we didn't hear anything back, which, to be honest, was almost a relief, as neither of us can stand Jay Z's music!

We got a taxi into the city, complete with very entertaining driver in the way only Irish drivers can be, warm, friendly and chatty. He was an educated man, trained teacher (no jobs for teachers), had taken courses in writing and written a screenplay, plus he was a natural comedian.  Wasted as a taxi driver, but he said he enjoyed meeting people from all over the world in his job. As I listened to the driver's lilting Irish accent and watched the familiar landmarks pass by it felt so good to be back in a place that feels like my second home.


We were dropped off at Smithfield and met up with Pat, the owner of the duplex apartment at Smithfield Tower which we were renting for the week. He's another natural comedian, and if there was a human form of a leprechaun, it was Pat. Small, rotund, grey hair, rosy cheeks with a mischievous air about him. The apartment was wonderful, directly opposite the old Jameson Whiskey Distillery chimney, modern and spacious with everything we needed..

We'd barely made our cup of tea (well, we are English and you've got to have a cuppa when arriving at your destination!) when Dianne and Dan arrived. They had come over to Ireland from Canada a week earlier and had been touring the North and got the train from Belfast to Dublin.

We had a relaxing evening catching up, eating pizza and drinking wine. We ended up playing a game where we picked music we like that may not be so obvious and Deb would play it on her iPod for us all to hear. It gave an insight into the very diverse musical tastes we had - some of my choices were, The Slave's Chorus from Verdi's Nabucco, Hallelujah by Jeff Buckley and Good Vibrations by The Beach Boys.

I always love the first evening of a holiday, being with friends again and a whole week or two stretching out ahead full of good times, nothing beats it!

We caught the Luas to Connolly Station and got the DART heading south to Killiney.  It was initially cloudy but as the day passed the sun came out and it was lovely. I love Killiney beach, which is a couple of minutes from the DART stop. Whatever the weather it is beautiful with the graceful sweep of a horseshoe bay with Dalkey Island to the north end and Bray Head to the south. We wandered along beach-combing, relaxing, enjoying the fresh sea air, sometimes the simple things in life are the most enjoyable.

After Killiney, we travelled one stop on the DART to Dalkey where we went to bustling Finnegan's Pub for a late lunch. I had the cottage pie and it was scrumptious!


That evening we went to a Moroccan restaurant we had never been to before called Dada. I was a bit cautious about it as I can't eat hot spicy food, chili and curry are lethal to me! But I was assured that not all their food was hot and spicy. The restaurant was atmospheric, darkly lit (in fact we had difficulty reading the menus lol!) Lots of lanterns that cast beautiful patterns on the walls, it was a very relaxing place.

We shared dips and bread for starters and then I chose the lamb tagine with apricots, walnuts and cinnamon. It was to die for, the lamb was so tender and succulent and the subtle flavours of the spices made for a fabulous dish. Everyone else really enjoyed their meals too. Prices were reasonable and service good, I think we will be going back to Dada on future visits to Dublin!

Every time we are in Dublin we go to Bewley's Cafe Theatre, it is cheap, intimate and, best of all, the plays are also always good. The theatre is a small room on the second floor of Bewley's Cafe. Set with tables and chairs and a small stage set in one corner and for a small fee you can get soup and soda bread if you want.

The play we saw was Fred and Alice by the Limerick county Writer John Sheehy.  It is about two special needs people who have different obsessions, Fred's is music, Alice's is numbers. They met in the mental care institution, Alice's effervescence brings out the shy Fred, and he is the calm shelter and support when she flies off too high, obsessed by her numbers. They compliment each other. The acting was amazing, and it's such a great experience to be so near the performers as you are at the Cafe Theatre, it draws you in, you get very involved in the play. The play moves forward to the couple living in their own home and the basic difficulties of independence, you really want them to succeed and their upbeat attitude wins out, they want to succeed in the real world and they will, in their own way.

In an interview with John Sheehy I found the following paragraph enlightening, it describes the essence of the play in a way I could not.

What was it about the issue that attracted you as a playwright?
I am interested in the idea of personal identity, where it comes from and how much it is affected by society and by those closest to you. By writing about characters whose brains are wired differently than what is considered "normal" I was able to look at the effects of labelling a person as an illness rather than an individual. Fred and Alice reject all labels and find their own unique way to live their lives.

We all loved the play, it covered a subject matter rarely looked at in such a positive way. As a ex-psychiatric nurse I would love to see Sheehy write a play about people with psychotic illnesses and show that people with mental health problems are just human beings trying to make their way in a difficult and unsympathetic world. 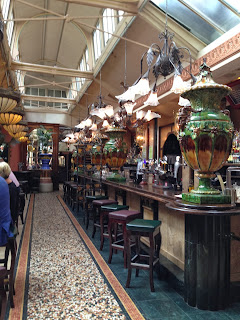 After the play we all walked the short distance to Cafe en Seine for our lunch. This place is a fabulous over-the-top  French belle epoque-style cafe. I had smoked salmon on soda bread with chips and it was absolutely delicious and very reasonably priced too. after their lunch Dianne and Dan left and Debbi and I embarked on our "lazy day". We started this last year in Nice, when we just drifted from place to place and had a drink, no particular plan, we just went into places we liked the look of. We enjoyed it so much that we decided it would be a feature of future holidays! So, our lazy day started in Cafe en Seine with cocktails, I had a Singapore Sling which was one of the best cocktails I'd ever had, absolutely delicious!

On leaving the Cafe en Seine we walked about twenty yards and went into Samsara and had cocktails there. we went for the good old Cosmopolitans. They were very strong and I had to water mine down with some lemonade (bit of a wuss I am lol!). Debbi managed hers without any watering down.


Next stop was a restaurant called Pasta Fresca. We saw a sign saying "prosecco bar" there so couldn't resit that invitation. We had our prosecco with some garlic bread which went down very well indeed.  It was so mild that we sat outside and it was not cold, amazing for October in Ireland!

Our next stop was just across the road, the Clarendon Bar, an Irish bar. We ordered prosecco again, and it came in a snipe (new for me, never knew those little bottles were called that) and bucket of ice! The server was so lovely and made us feel special.

We decided it was time to finish our lazy day after this, we'd sampled French belle epoque, ultra modern, Italian and Irish bars so had done pretty well! We headed back to our apartment at Smithfield. I was even sober enough to cook the evening meal of lasagne and salad which we all enjoyed. Afterwards we relaxed with some wine and chat. A lovely end to a great lazy day.