Gardens, a New Canine Family Member and a Dachshund Meet-Up 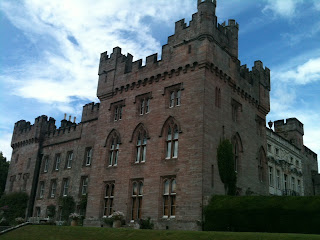 I've been busy these last few weeks, I think because out lovely warm and sunny summer continues everyone is doing so much more outdoors.  Last weekend I met up with my friend Alison and we went to Hutton in the Forest about 15 miles south of Carlisle.  The oldest part of the castellated house is the pele tower that was built around 1350. Pele towers are fortified houses to protect the wealthy owners from the violent cross-border skirmishes that were frequent in the south of Scotland and very north of England hundreds of years ago, many still survive today. Over the centuries the building was gradually added to by its inhabitants until it became a sizable property. It is also known for it's lovely gardens.

There was no one in the booth where you bought tickets so we entered the grounds and paid the fee via the honesty box. It's nice to be trusted! We only wanted to wander around the gardens so we just paid for that. We walked round the house and into the walled garden. It was separated into four areas by hedges. There was a beautiful rose garden, full of gorgeous old-fashioned tea roses. The flowers were just past their best, they were probably at their most glorious two to three weeks ago, still, they were lovely. 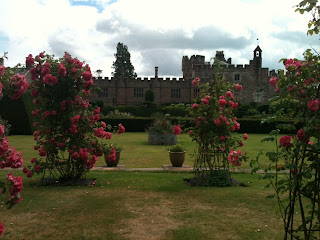 The general theme was of an English country cottage garden, full of flowers that looked very natural and not "designed", not formal. I loved it, and something about walled gardens makes it feel very, very old too. We were the only people there and it was very relaxing and peaceful.

There were some sculpted topiary works, and some more formal beds outside the walled garden. And there was a lake further away which wasn't impressive, but apparently it is all being renovated at the moment, it should look better then.

All in all it was a simple but enjoyable way to spend an afternoon. Both Alison and I love visiting places like this so we really had a good time.

A bit of news I have is that I have a member of the family! I fostered a daxie cross dog called Ellie for a week, then she went to new owners, only to come back two days later because she pulled on the lead! Have they not heard of training?? Poor dog.  I had fallen for her before she ever went to be honest and after having her back for a couple of days decided to officially adopt her. So now, she's mine! The boys are fine with her now, they were horrible to her at first! But now they have accepted her, Max ignores her and Pepsi is starting to interact with her which is nice. She's very sweet and gentle, quiet, bright and quite obedient. She's aged two to three and has had a difficult life so far, she's one of the Irish dogs, saved from certain death, then into fostering. But now she's landed on her feet and I'll give her a happy life, and she's already giving me lots of love.

Finally, yesterday I drove down to Kendal to a daxie meet up of members of Facebook's Dachshunds of Cumbria and the North.  We met up near the river and went for a walk along it's banks.  There were long-hairs, two wires, one double dapple, one half sausage (Ellie!) and one laid back spaniel. They all got on very well, and their owners were lovely, so nice to meet up with the people I knew only by name and to see their gorgeous dogs in real life.  We created a bit of a sensation as we walked along with our sausages, you don't see a lot of them anyways and to see seven at once caught people's attention.  They are funny little dogs, and it always amazes me how many varieties of colour and coat there is within the breed. We had fun - and good weather - and I'm sure will be doing it again!

Email ThisBlogThis!Share to TwitterShare to FacebookShare to Pinterest
Labels: Dachshunds of Cumbria and the North, Ellie, Hutton in the Forest, Kendal