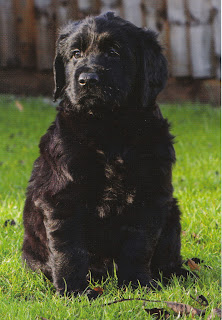 Meet the gorgeous Scooby, a potential guide dog for the blind that I am sponsoring.  I was in Sainsbury's the other day and there were people there from Guide Dogs for the Blind trying to get people to sign up to sponsor puppies for their training - which lasts two years and costs £28,000 per dog.  It was something I had been thinking about doing for a while so I decided to sign up. There were two dogs to choose from, the other was a gorgeous golden "Andrex" puppy, but I chose Scooby because I thought not as many people would go for him even though he's such a handsome boy - it's that black dog syndrome  they are the ones least adopted in kennels too. I think he's fabulous with his luxurious, shiny, curly coat!

Sponsoring costs only a few pounds a month and you are regularly sent information - Pupdates - about your dog's progress and photos right until he/she graduates at around two years old and is matched with someone.  This is my first photo of Scooby he's a golden retriever/labrador mix and he's around six week old.  Once you have signed up they send you a little album to keep your photos in, along with a certificate, and a small calendar. I think it is lovely how you are able to keep up with your dog's progress in such a close way, and online there is even more, including videos of the dogs.

I think guide dogs are absolutely amazing, and I'm proud to be able to help in the training of Scooby in a small way. He has loads to learn, and I'll eagerly watch his progress - I'm sure he'll do well! I'll keep you updated.

You can read more about sponsoring a puppy here
Posted by Sue Fell at 22:54

Email ThisBlogThis!Share to TwitterShare to FacebookShare to Pinterest
Labels: Guide Dogs for the Blind, Scooby, Sponsor a Puppy