Apple Day (Nothing to do with Steve Jobs!)

One of the few fruits that thrives in northern England is the apple.  This is the time of the apple harvest and many areas hold their own Apple Days.  Today I went through to Harestanes, a country park just outside Jedburgh, to meet up with my friend Alison and to go to my first Apple Day.  It was difficult to find and in the end I came across it by accident and arrived half an hour late!  Alison was helping out at a Border Organic Gardeners stall and I met her there.

We went over to a room in what looked like a converted stable block which was full of fresh apples, the gorgeous, aromatic smell hit you as you walked in.  I had never seen so many apples in my life!  Most were English varieties, but there were some from the US, Australia and other countries.  All had information about them on little cards complete with how they tasted.  You could touch and pick up the apples which was nice, somehow you want to be tactile with things like this.  There was one absolutely huge whopper whose taste was noted as "insipid", not exactly inspiring!  They also had information leaflets about how to look after apple trees, I picked one of these up as I planted a Cox's Orange Pippin tree in my garden earlier this year and have no idea how to look after it.

There was a stall of honey products that had delicious ginger cake made with honey instead of sugar.  We had a wander round the craft rooms, one had fabulous leather handmade handbags - one of the women was actually making one when we were there.  They were beautiful and unique, expensive but not outrageously so.  I had to put my sensible hat on and resisted the temptation to buy.

We went to the cafe for something to eat, and there was an apple theme to much of the menu.  I got into the spirit of it and had tomato, celery and apple soup (delicious) and an apple and cinnamon scone (equally delicious.)

We went on a walk through some nearby woods which was very pleasant, shame I'd left my dogs at home, but I am wary about leaving them in my car nowadays with all that you hear about pedigree dogs being stolen. 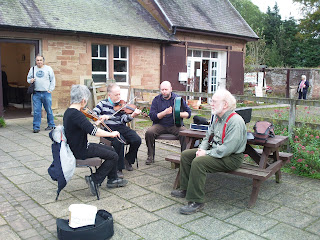 Afterwards, seeing the weather wasn't too bad, we sat in the central square, had a cappucino and listened to four musicians playing traditional music.  As I listened I noticed how like Irish music it was, bodhran and all.  There was a lovely atmosphere, busy and the people were chatty and friendly. It's good to see that local people still like and frequent traditional events like Apple Days.  It was a first for me and I thoroughly enjoyed it!