Debbi and I flew in to Dublin airport from different UK airports (I go via the cheapest/best times place, this time it was Glasgow.) We met up at the airport and got the Air Coach into the city as there was a stop very close to our apartment.  We had no problems finding it and it was really nice. We got the shopping in from a nearby Spar, then ordered a Chinese takeaway and had that with wine. It felt good to be back in Dublin, our second home!

We had been due to go to our friends Ken and Elizabeth's for a meal that evening but Ken had been taken into hospital. But Elizabeth suggested meeting her at an Italian place called Bianconi's on Merrion Road near the hospital instead. It was good to see her again and we had a good chat and the food was delicious too.

Afterwards we got more shopping in at a nearby Tesco's before heading home. Later Debbi went out to meet her friend Paddy, I opted out as I was tired and just wanted to chill. 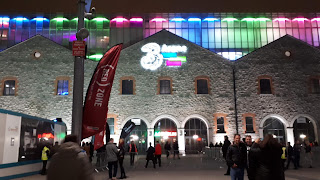 First gig today, we arrived at the 3Arena in the late afternoon. We intended having a meal at the nearby Gibson Hotel like we did last time the band played the arena, but they were not letting non-residents in. We ended up having a meal at a place called Ruby's just behind the arena which was cheap and really good.

We went into the 3Arena and our seats were really good, we could see the main stage, b-stage, walkway and hanging screen. Because the arena is so small the walkway was much shorter. The show was good, the Zoo part and the new songs, which fit so well into this show, are my favourite parts. I prefer this tour to the Innocence one as it all gels together perfectly.

The only downer was the crowd. I'd say most stayed sitting down, many more interested in talking or their phones than the show. Very disappointing, especially for a home crowd.

Afterwards we met up with our friends Declan (who was suffering from man flu,) Jane and Sharon and had a chat for a while, everyone had enjoyed the show. Missed  my friend Dianne who had to cancel coming to Dublin just days earlier. Afterwards we walked up the quay, across the Liffey and back home.

Paddy came round to our flat at 2am! Good job we stay up late after shows. He recently turned 50 and we had set up a little party and gifts for him which he seemed to really appreciate. We had lots to eat and drink and there was lots of laughs and conversation putting the world to rights. Paddy left at 5am and we crashed out afterwards.

We'd had a very late night so we took it easy today. For this show Debbi had a GA ticket but I had chosen to have a seat as the crowd in Dublin can be a bit "lively." It was another really good seat even though it wasn't a top price one.

What a difference a day can make, the crowd around me were great, up dancing and singing along from the word go. The crowd was loud and the energy between them and the band bounced back and forth. You could tell Bono was really emotional at times, after Get Out of Your Own Way the fans kept singing long after the band has finished and he just stood smiling. It must be especially great for an artist when the audience is singing one of the new songs like that.

I loved the whole show but highlights for me included the great Zoo segment, and MacPhisto's speech where he really let rip about Donald Trump.  This part was also a bit more personal than it had been as Bono said that he saw his dad in him when he looked in the mirror that day and hoped that he would be proud his sons.

It's amazing how different shows can feel. For me this was one of those special ones where the magic happens, where you're on an emotional rollercoaster. And it's after shows like this I know why I have been a fan of this band for 35+ years. 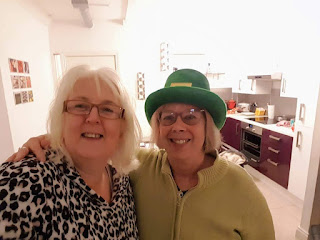 I met up with Debbi outside the arena and she felt the same as me about the gig and loved it. We walked back home and had something to eat, wine and chilled. Our apartment is lovely but there were a couple of strange things there. One, a leprechaun hat (which explains the photo) and the other being a bottle of absinthe that was between two glass panels beside one of the doors! 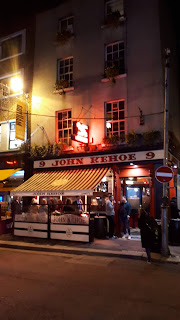 Today was our designated lazy day where we just mooch around where ever we are and have a few bevvies. We had been due to meet up with Jane and Sharon at lunchtime but they had to cancel. We were also due to meet up with Declan that evening but he cancelled as his man flu was even worse. This was the trip of cancellations!

We first went to Sam's Bar but didn't stay long as it was quiet and there was no atmosphere. Next stop was Kehoe's which was great, it's one of our favourites. Our final port of call was  O'Neill's another favourite, where we had their delicious chips and the best onion rings in the world!

We took the DART to Dalkey today and had lunch in Finnegan's and then coffee in nearby Queen's. It was raining so we didn't go on to Killiney as we'd planned.

That evening we went all touristy (we've been coming here so long that we don't normally do things like that) and went of the Irish Food Trail. We met our guide, Grainne, at Dublin Castle and were joined by people from Canada, America, England and Iceland who were all really nice.

Our first stop was the Boxty House where we had potatoes three ways. My favourite were the boxty chips, different from normal chips and delicious.

Next stop was Gallagher's where we had the choice of three mains. I chose fish and chips which were wonderful.

Final place was Dakota's where we had dessert which was a Bailey's cheesecake and very good it was! We also had a bit of fun and made our own Irish coffee, mine didn't really work out lol!

All in all the tour was excellent and good value for money We learned new things about the city and its history and also sampled good food in places we'd never been to before. Grainne was a knowledgeable and friendly guide and I would definitely recommend the tour.

Nasty weather today, howling wind and torrential rain so we didn't do much during the day. Later we went to a bar near the 3Arena for a meal, which was cheap and filling but not great. 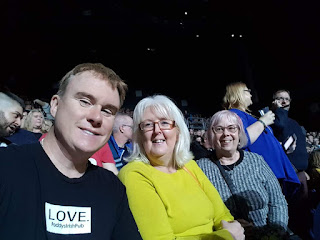 We met Paddy, who had our tickets, outside the arena and went in. For the third time I was able to go in without my bag being searched which I don't think is good in this day and age. Our seats were really good. I got chatting to a lovely woman beside me whose birthday it was. She had been a fan of the band since 1987.

The show was good but spoiled to a degree by security making people sit down! They kind of gave up in the end as people wanted to stand. The woman beside me kept saying about Bono, "Isn't he good?" which he is! When he talked about Brexit and the hard/soft/no border she turned to me and said, "There is no them, there's only us" quoting the song Invisible which I thought was so nice. We got Dirty Day for the first time today which was a bonus. 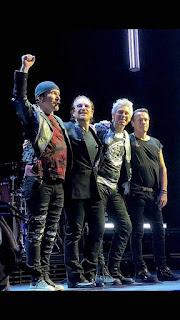 I felt a bit emotional during One as I wondered if I'd ever see the band live again. Bono looked tired and I think illness and his accidents have taken their toll on him. Plus he's said a few times that they are going away. And of course I'm not getting any younger either, I was very tired by the end of the week.

We met with Declan briefly after the show, he was still suffering from man flu and chatted with him and Paddy before getting a taxi and heading home.

It was the end of our week in Dublin and the tour for us. We had fun as usual, I love the touring life! We were sad it was over and can only hope there will be another tour to enjoy in the not too distant future.
Posted by Sue Fell at 01:09