We arrived in Dublin after a bit of a nightmareish Ryanair departure from Manchester. They announced over the tannoy that it was the last boarding call for the Dublin flight. When we got to the gate everyone was waiting, and waiting and waiting for at least an hour, no one told us that the plane had been delayed in Dublin and was not even in Manchester yet (we found out later!) Eventually we boarded and before we knew it we were back in Dublin on a pleasant evening. We caught a taxi to our accommodation, which was lovely and larger than it looked from the photos and a good location. As usual on our arrival evening we got the shopping in from a nearby Tescos, ate in and had some wine.

July 20th
We were woken far too early by building work going on beside our apartment. We had an easy day and then later Debbi and I split up, she went to meet a friend and I went to Dun Laoghiare to see friends Ken and Elizabeth. As I travelled south on the DART Dublin Bay looked beautiful. calm and blue on this lovely summer evening. I had good night with my friends, as usual Elizabeth had laid on a good spread, which unfortunately, due to my stomach problems, I couldn't eat as much of as I would have liked to.

July 21stWe went to Bewley's Cafe Theatre (which is still being held in the Powerscourt Townhouse while Bewley's is being renovated) to see To Hell in a Handbag. A very funny play about the secret lives of a rector and a governess inspired by Oscar Wilde. We had delicious mushroom soup and the best soda bread in Dublin as we watched the play. This was going to be our lazy day, we always have one when we are way, we just drift from pub to pub and chilling out. We first went to The Octagan Bar in the Clarence Hotel to sample their Joshua Tree cocktail, specially created for this U2 tour, it was delicious. Next stop was O'Neill's pub, a large place over three floors with lots of nooks and crannies. We ordered some chips (the best in Dublin) and some onion rings, strange combination but it was what we fancied! We had a long wait but it was worth it, the chips were proper chips, big and tasty and the onion rings huge and crispy, very yummy. Our next stop was The Brazen Head pub, the oldest pub in Dublin, but it was heaving so we left and walked the short distance back to our apartment.

Showtime! First we stopped off at The Study at The Clarence Hotel and had coffee, and I ordered a scone. First off we had to ask at reception to be served, then waited ages for the simple order. Then I had to ask for sugar for the coffee and also pointed out that I should have had whipped cream with my scone as per the menu. The waiter left then came back and said said they had no cream (??!!) and would I like something else like honey - yuck not with a scone thank you! I said that wasn't very good and could I have a discount, again the server left and came back and said no, the price is for the scone and the jam and cream are extras! I was dumbfounded, how ridiculous was that? The server was very nice, it wasn't his fault, but it was terrible service for a simple order. Finally we again had to go to reception for them to call someone so we could pay, the Clarence isn't what it once was. 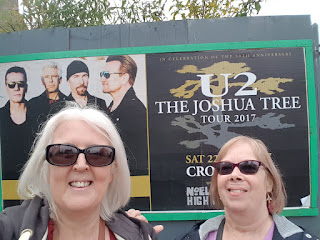 We got a taxi which dropped us off as near to Croke Park where the U2 gig was going to be. It was already quite busy and we bumped into our friends Declan, Jane and Sharon. Declan was actually on holiday in Portugal and had come back to Ireland and was flying back to Portugal the next morning, that's dedication for you!

Our seats were really good, and shortly before U2 were due to be on we were joined by our friend Paddy. This show had a lot of energy from the band and the audience. The set list was simlar to London, Bono added a it of America on the end of Bad instead of Bowie's Heroes which I felt did not work as well, Heroes was perfect. As the band started playing the Joshua Tree songs with Where the Streets Have No Name, the Irish Flying Corps flew over the stadium trailing smoke in the colours of the Irish flag, very impressive! Only U2 could pull that off. Half way through the Joshua Tree Bono said, "Welcome to side two of the Joshua Tree Cassette," Which made me smile, some of the younger people there wouldn't even know what a cassette was! The show was amazing, once again Exit was the highlight for me. I was sad when it finished as this was to be our last show of this tour.

After the show we met up briefly with Declan, Jane and Sharon again, then Paddy went off to have a drink with a few friends and was coming to our place later, whilst Debbi and I went off looking for a taxi home. There was absolutely no chance of getting a taxi and we ended up almost home by time we found one. We were exhausted when we got into our apartment and almost kissed the floor with relief! I'd barely put the pizza on when Paddy arrived, he'd left after an hour with his friends and got a taxi easily!

We had a lovely night putting the world to rights, discussing  an eclectic mix of Trump (Paddy lives in America), genealogy, art, and guns to name a few subjects. Paddy left at 6.30am and we crashed at 7am, we are real rock chicks lol!


July 23rd
Got up in the afternoon and later we went to the Octagon bar to meet our friends Jane and Sharon, we were sad that our friend Dianne hadn't been able to come due to travel problems, but I'm sure she was with us in spirit. Another friend Patty joined us for a while too, it was good to catch up with everyone. Debbi and I had another Joshua Tree cocktail but this one was totally different to the one we had the other day! Afterwards we had an early night as we were off home the next day.