U2ie Tour, Part One - London, The Tour Madness Has Started!

I know I am guilty of neglecting my blog recently, but I'll make up for that in the next few weeks as the U2ie Tour shows have started for me - at long last. We got the tickets almost a year ago and it seemed so far away, and in a strange way, it also felt unreal, even when my friend Debbi and I arrived in London on October 24th. We had rented an apartment a ten minute walk from the O2 with a glorious view across the river Thames, which turned out to be perfect. We explored the area and got shopping in and had a relaxing evening really looking forward to the concerts to come.

We got up late and had a leisurely breakfast. Later we wandered up to the O2, what an amazing building it is, like some huge white flying saucer. We had a Mission this tour. My friend Debbi and I have collaborated to produce a book of her writing and my paintings. We have put together a first draft and wanted to give one to Bono, and we were determined to fulfil The Mission!

We hoped to see the band arrive but didn't so we had a meal at the nearby Cafe Rouge, I had Garlic Mushrooms and Chicken Breton and a glass of very nice champagne. I will write a full review of the meal at a later date. 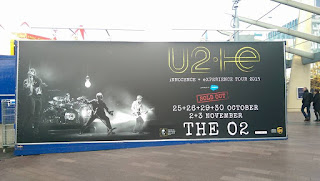 Afterwards we sat by the river watching a beautiful sunset then it was time to go into the O2 and find our seats. We got in the queue and waited and waited and waited. It was at least one hour and a half minutes before we got in, never have I had to wait that long to get to my seat at a gig. We found out later that the scanners had broken down. Technology is great when it works.....

Our seats were wonderful, in the lower tier almost directly opposite the e-stage, I certainly was glad I wasn't in the upper tier, very, very high up and scary. At the other end of the floor was the rectangular i-stage which was connected to the round e-stage by a long catwalk. I will be seeing a few shows and won't be reviewing them in detail here, I'll just pick out certain bits.

At around 20:15 Patti Smith's People Have the Power rang out and Bono entered the arena via an entrance just below us, he clapped and ambled along in his inimitable way and walked up some stepa and onto the e-stage. Then the opening chords of The Miracle (of Joey Ramone) thundered out and Bono walked the length of the catwalk and onto the i-stage to join his bandmates and the song started properly. Great start.

I was kind of overcome at the beginning of the concert, it had been a long time coming and right until that moment it had felt almost unreal. Then suddenly there was the band I've been a fan of for 32 years doing what they do best, playing live, and it was REAL!

The sheer power and energy of the opening set of songs, The Electric Co, Vertigo and I Will Follow was stunning, and it was just the four band members playing on the i-stage, no gimmicks just four musicians giving it their all. It really showed how good they are.

The mood changed with he next song Iris, a song about Bono's mother who died when he was fourteen. A huge video wall (almost the length of the catwalk) descended and it showed various images including including his mother. It was incredibly emotional. He said when she died she left him an artist. He was singing about himself in that song, but the gist of it can apply to anyone who has lost a loved one.

This was followed by Cedarwood Road, the street where Bono grew up. Wonderful images on the video wall of the street and images from Bono's youth that it conjured up. At one point Bono got into the video wall and was walking along within the video, very clever. I found the songs from the new album stood up very well live, especially Raised With Wolves which was amazing live.

There was a short interval when a virtual Berlin Wall completely separated the two sides of the audience. Then, one of my favourite new songs, Invisible, began. Then there were areas where the wall disappeared and showing glimpses of the band members inside the wall. It's hard to explain really, but it was very cleverly done and so in tune with the song. I think initially some of the audience thought the images of the band were part of the video, not humans within technology/

Bono got a woman up for Mysterious Ways, Trish from Canada, whose vintage style must have caught Bono's eye. She was really good, she danced well and flirted with Bono but didn't go too far. She was given a phone to film the audience which apparently was being broadcast live all over the world.

A few songs on they did a reworked  Bullet the Blue Sky, which was absolutely amazing! At one point Bono argued with his 19 year old self who said he sold out and had private planes and lots more. At the end Bono said wearily, "I know,  I know." We are all very different people from when we were 19. Edge's guitar solo in this song was wonderful.

After this the final segment of the show they did a run of some of their most popular songs, including
Streets, Pride, With or Without You. Streets was so uplifting, the audience sang most of it with Bono looking on in wonder. They finished with One.


In conclusion for me it was a stunning, powerful gig, the sound was good, video screen was amazing. They used the catwalk and stages very well and the setlist was well put together. All in all a brilliant concert. U2 are definitely not past it.

As Debbi and I walked home we hardly said a word, the show just blew us away and we initially couldn't find words to describe the experience. One home we opened a bottle of champagne to celebrate the start of our U2ie Tour.