I got back from Dublin yesterday and it was as great as ever.  I was so ready for this trip, I find that after about three months at home I'm ready to go off somewhere else and it had been four months since my Canada trip in the summer.  Also, it had been 11 months since my last visit to Ireland, the longest I've not visited in well over twenty years! The long gap was U2's fault, their everlasting 360 Tour's last leg was in North America in the summer and, well, we just had to see some shows and have a holiday at the same time didn't we?  But it was expensive which meant this trip to Dublin had to be done fairly cheaply.

Debbi and I met up at Manchester airport and, as usual, we just picked up from where we left off last time we got together.  We got to the security area and had to get our little packs of liquids etc out of our cases (we only had hand luggage) and I discovered I'd brought the wrong keys for my case padlock!  They rang for someone to come down to cut off the lock.  Soon a man arrived with a huge bolt cutter which cut through the padlock like it was butter.  As he was walking away deb said.

"A man with a tool." And we both giggled, I was just going to add, "A very big tool!"  When he glanced back and we tried to be sensible LOL!

No more mishaps and after a 35 minute flight we landed in Dublin on a mild, bright day.  Our taxi took us to our Travelodge Hotel in Ballymun.  When I'd first seen rooms there I wondered whether to go for it as Ballymun was once a notorious area of the city.  But there had been a lot of regeneration and our friends in Dublin said it was not as it used to be.  So we booked our rooms for the grand total of 25 Euro per night, a snap!

Most of the area was new build with those odd empty areas and some roads leading to nowhere.  There were still a few of the old 60's flats and the shopping centre close to our hotel was a relic from the past, and very rundown and most of the shops were empty.  But we went there as it had a Tesco and we needed to get a few supplies in.  We noticed it was cheaper than other supermarkets we had been in which was a pleasant surprise.  We also noticed there were a lot of people in tracksuits around, often in lurid colours, the best we saw was powder orange with lime green stripes down the side.

We got a half price bottle of champagne, wine, nibbles (Tayto crisps yay!) and something for our breakfasts. There was a Macari's fish and chip shop right beside the hotel so that was dinner sorted.  I love how they make fish and chips in Ireland, they cook the fish when ordered and leave it to drain for a minute or two once cooked, so it is always lovely and crunchy, never soggy.  The big, fat chips too were yummy too.  We'd both been dieting for a while and it was such a treat to have a meal like this.  And the champagne went with it very well too.

The rest of the evening we just chatted and nibbled, finished the champagne and opened some wine.  All very relaxing, it was good to chill like that.

We tend to have very lazy winter holidays in Dublin and this one was no exception.  We've seen all the usual sights of the city as we've been going over for so long - though we did read about the new Fabulous Food Trails which sounds perfect for us and we've already made a note of it for our trip next year!  So, anyway, we had a lazy day and then got our glad rags on for our meal in The Tea Room Restaurant  at The Clarence Hotel in the city centre.

We first went into the Octagon Bar to have a cocktail as they were on special offer.  We each had a Cosmopolitan, our fave, and it was perfectly made.  At 8pm we went through to The Tea Room for our meal.  They have an Early Bird menu (which some days is valid all night) which is 25 Euro for two courses, 29 Euro for three courses, excellent value for such fine dining.

To start we had Duck Rillette which was slow cooked shredded duck made into a kind of pattie and placed on homemade rye bread.  It was accompanied by wild mushrooms, capers, beetroot leaves and dressing.  It was very good, though also very filling as the rillette was large.

For our main course we again both chose the same - slow cooked Irish loin of pork which was wrapped around pancetta flavoured with sage and parmesan, accompanied by sea asparagus, gnocchi, confit tomatoes and olive jus.  The meat just melted in your mouth, very tender and the tomatoes were so delicious we asked how they had been prepared. I'd never had sea asparagus before and it was delicious. To accompany the meal we had a lovely bottle of Chianti.

As usual the service was excellent from our two Eastern European servers, one, who was from Estonia, was especially attentive.  The atmosphere too, even though it was fairly quiet in the restaurant, was good, relaxed and comfortable.

We had no room for dessert (our stomachs must have shrunk with our diets LOL) so went through to The Study to finish off our wine, which was brought through for us by one of the waiters, and we just took our time finishing it.  It was a relaxing end to an excellent evening.  We've been going to The Tea Room for many, many years now and it has never disappointed.

Another lazy day and then another lovely night out!  This time we were trying out somewhere new, The Bridge Bar and Grill on Grand Canal Quay.  We've been to it's sister restaurant The Town Bar and Grill a few times and loved it, so we thought we'd try this place for a change - we have decided to try a new restaurant every time we visit Dublin.

The restaurant is built into the railway bridge on Grand Canal Quay in Dublin's Docklands, inside you can see one of the bridge's arches.  It is a bit out of the way and the part of the Quay it is situated on is not a through road, so not the best of locations, I thought it would be nearer all the other eating places further down the Quay. 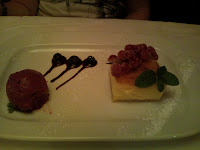 We were seated in a booth at the window, though there was not a lot to see LOL!  The seating was comfortable, but, for me, the restaurant was too cold, though Debbi thought it was ok. Surprisingly, we did not hear the trains that passed over the bridge, very good soundproofing!

I had some Guinness bread while we were waiting, it was delicious, like a combination of soda bread, pumpernickel and, well, Guinness. For starters I had Katafi crab cake with roasted pepper and fennel compote, which was sooooo gorgeous, it looked fantastic too.  Deb had  roast butternut, chestnut and confit duck risotto, I tried a little and it was wonderful too, risotto cooked perfectly is so tasty.

For the main course I had chicken supreme, garlic and chive mash, baby leeks and morel jus, delicious!  Deb had belly pork, butternut puree, spicy puy lentils and saffron aioli. I'm not keen on belly pork, but Deb loves it and said it was fabulous.

We had room for dessert tonight, our stomachs must be stretching LOL!I was in the mood for chocolate and had chocolate fondant with white chocolate centre and ice cream - it was to die for yum yum!  Deb had caramelised lemon tart with blackcurrant sorbet, it looked too good to eat, I've put a photo of it in this article (sorry the photos are a bit dark, the restaurant was dark and I was using my mobile to take the pictures.)

The food at The Bridge Bar and Grill was excellent.  But for me it lacking a little in atmosphere, it felt a bit cold, both  physically and psychologically. I prefer its sister establishment The Town Bar and Grill and of course, The Tea Room.

Home time already.  We checked out and had a delicious, and very cheap breakfast in Macari's before heading to the airport.  Our flight back to Manchester was 30 minutes (we are so lucky to live so close to Dublin) and then we parted our ways, Deb to Stoke and me to Carlisle.  I had to change trains at Preston and the Glasgow train I needed to catch was literally pulling into Preston station as I was running over the bridge from the other platform, I sat down and the train left, that's how close it was.  That run was the most energy I expended in the last four days!  If I'd missed that train I would have been stranded in Preston for the night, I vowed then and there never to have to get the last train home again!

It was a short but sweet visit.  Dublin is like a second home to me, from the first time I set foot in the city in 1989 I felt I belonged, "It's not where you are born, it's where you belong" some band said LOL. So true, and that has never changed for me over all those years.
ysicall
Posted by Sue Fell at 19:20

Email ThisBlogThis!Share to TwitterShare to FacebookShare to Pinterest
Labels: Dublin, Ireland, The Bridge Bar and Grill, The Clarence Hotel, The Tea Room Restaurant, The town Bat and Grill