Monday morning (we were up in good time, having gone to bed at midnight, a record for us on this tour!)and we headed off to Liverpool Street station on the Tube - it seemed to take forever, and it was very warm. Once there we got our (expensive) tickets for the airport train to Stansted from where we were flying to Glasgow. Everything went smoothly and we stepped out of Glasgow airport to a cool and showery evening. We decided to get a taxi to our accommodation in the city centre. The driver asked if we were in town for the U2 concert and we said yes, he said he was surprised as we "Didn't look like U2 fans", he added that we looked, "Too classy"! A very diplomatic Glaswegian LOL.

We were renting an apartment near the Central Station which turned out to be absolutely lovely, large with everything we needed and very handy too. After a cup of tea we went out and got our shopping at a nearby Tesco's. It was spitting with rain and a lot nippier than in London, what a difference 400 miles makes! But I was glad to be in a city on a more human scale than London.

We then went to a Chinese restaurant called Ho Wong only a five minute walk away from the apartment that I had found on the Net. It was situated in a not too appealing area some of which seems to be getting demolished. Reviews had mentioned the area but said the restaurant was very good. This turned out to be true, the restaurant had a smart, modern decor and a relaxing atmosphere. The food was fabulous, full of delicate flavours that I had not encountered in other Chinese places. It was quite expensive, but worth every penny.

We went back to our apartment just in time for the arrival of our friend Alan, along with a friend of his called Doreen who we'd met briefly in London. It was especially nice to see Alan again, we don't see him very much now that the U2 tribute band he sang in has split up.

Next morning our friend Dawn arrived - Glasgow was to be her first U2 360 show and she was very excited about it. We got the train to Mount Florida from the Central Station close to our apartment. The journey to Hampden Park took ten minutes, then it was five minutes from the station to the stadium. The first thing we had to do was pick up our red zone tickets. Then we looked for where the band might arrive as we were going to wait for them as Dawn had never met any of them. She did know it was unlikely that would happen there, but there was no harm in trying.

The wind became quite strong and there were intermittent light showers. At one point the wind blew over part of a nearby merchandise stand, people tried to re-erect it in vain, the wild Scottish weather was the winner!

We had no luck seeing the band arrive, in fact they had not arrived (so no soundcheck) by time we were allowed into the red zone area. We got a really good place near the front end of the zone, just where we wanted to be. Dawn went to the toilet at 6.15pm and saw U2's cars arrive with a police escort, that's pretty last minute! The toilets, by the way, were lovely, no scummy portaloos in Glasgow. We had a portacabin with separate male/female toilets, and proper toilets too, with lots of toilet paper (VERY important!), nice handwash, and the best bit of all - it was deliciously warm! So we went along regularly to warm up as well as use the loo as it was a cool evening.

U2 hit the stage at around 8.20pm. After Magnificent Bono sang part of Flower Of Scotland which the whole au 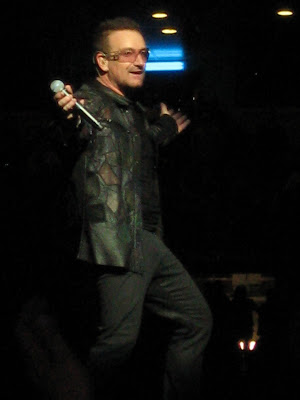 dience joined in with patriotically. During Get On Your Boots Bono and Larry faced it other and belted out "Let me in the sound, let me in the sound" at each other. For some reason the screen stayed up during Vertigo and so the "spinning" effect wasn't as good.

The audience sang along to Still Haven't Found.... and Bono turned the mic to the crowd and said, "They can hear you at Celtic Park!" Referring to a football match with one of Glasgow's teams, Celtic, taking place the same evening.

Crazy was absolutely fabulous once more, think it's my fave song from the concerts (if Bad isn't played). The band used the walkway more than most shows I'd seen, but not as much as at Wembley 2. I feel that is something they need to work on, how to best utilise the walkway.

During MLK things started to go wrong technically big time . For some reason the bass became almost unbearably loud and deep. It was actually physically uncomfortable where we stood, our bodies vibrated with each note, it felt horrible.

The next song was Walk On and the technical problem continued. The bass was still as painfully powerful and instruments kept cutting out and starting again, then finally there was no sound. Maybe Joe had turned the sound off as it was 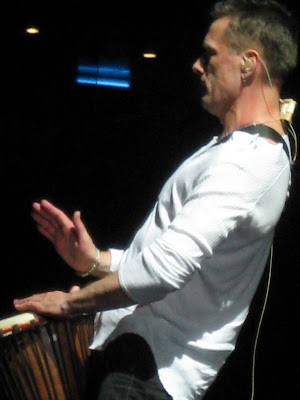 such a mess, I don't know. The band continued playing and singing and at first the audience sang along too, supporting the band. But as the silence went on and on and the band kept playing a the crowd started to jeer and whistle, which I felt was a shame as it wasn't the bands fault there was a problem like this. But maybe Bono should have used his front man skills and encouraged the crowd to keep singing, but he didn't, I think that was an error, but he was probably panicking inside so I'll forgive him that. It did seem a bit odd to have the band playing on like that as it lasted quite a while. But of course they don't know if the sound has come right again if they aren't playing do they, so maybe that's why they continued. At one point Bono looked round at Edge and didn't have a very happy expression on his face. Some people have written that the band didn't know the sound was off, but I'm sure they did, as when the sound came back on Bono punched the air with a fist and a big cheer rose up from the crowd.

The sound wasn't quite right for the rest of the show but at least the fillings weren't being rattled in our teeth anymore! In Ultraviolet the smoke machines went a bit mad, there was far too much smoke! There was a lot of emotion in With Or Without You, and, it seemed, also anger. Rather than the usual ending Bono added, "It's over, it's over" then adding vehemently, "It's not over". Not sure what he meant with that. As usual they ended with Moment of Surrender which I still think is not the ideal closing song. 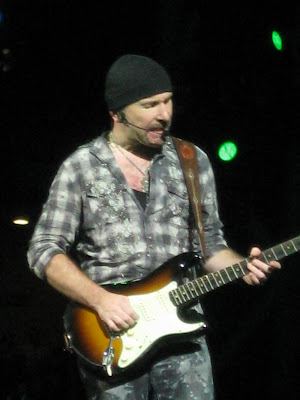 It was a good show, not a great one. There were a few funny moments like when Bono, who had his glasses on top of his head for a long time, couldn't see and kept wiping the glasses on his tee shirt, then he pretended to be blind and staggered towards Edge with a grin. The technical mishap they couldn't help, I think Bono should have said something about it afterwards, but he never mentioned it at all, except saying "Let's hope they don't have a match the same night next time, we might have better luck." which could have referred to that or the fact they were so late arriving (probably stuck in traffic heading to the match and concert).

I was sad at the end of the gig, that was U 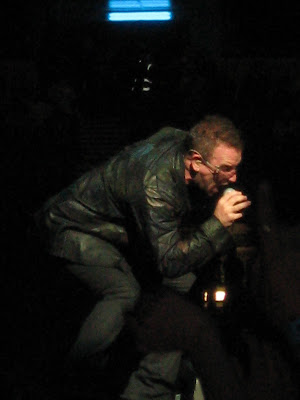 2 360 over for me. But I also knew I was very lucky to have been able to see six gigs, visit three countries and even meet Bono during the five weeks I was on tour - and we might have it all over again next year if the guys get that album finished!

We headed for the train station and were diverted by the police to the biggest queue I have ever seen - it took fifteen minutes just to reach the end of it! The showers started once more, strangely it had stopped raining for all the time U2 were on and then started again after the show..... spooky! But, mercifully, the queue moved fast and we were at the Central Station in the city centre by midnight (passing a pair of incredibly high, black patent leather stiletto shoes whose owner had stepped out of and left behind on the concourse, on our way out! Her feet must have been kiling her LOL). We were back at our apartment five minutes later.

Our night was just beginning, we had decided to have a party and buffet, so we got that ready, we washed it down with wine and champagne. We also had a U2 quiz with questions we each had prepared, that was fun, Debbi won and I was second. It was nice to end our tour with a party and toast to U2 and the next tour! We rolled into bed at 5am once more.

So, looking back what was my favourite show? Well, it is a close run between Dublin 1 and Wembley 2. In the end I have to say the winner is Wembley 2, it was an absolutely stunning gig, one of those unique shows that transcends just being a concert and moves to another plane. So those of you who still have concerts ahead of you, enjoy, you'll have a ball!